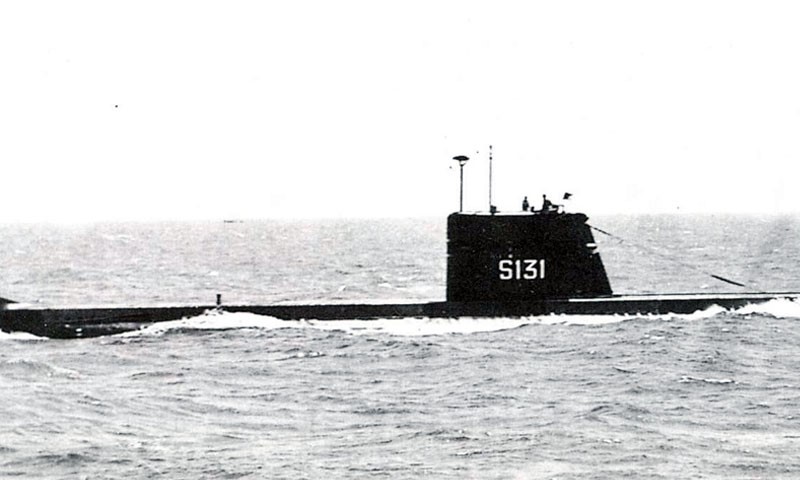 PNS/M Hangor (S-131) was a Daphne-class diesel-electric submarine. S-131 was nicknamed as ‘Shark’ that haunted Indian navy forever. It was its own kind of lead ship that was constructed and built in France. It was built after complicated and long-term workout which actually started in 1966.

She earned fame when, on 9 December, 1971 in Indo-Pak war. She sank Indian navy’s ‘INS Khruki’, an antisubmarine frigate along with one homing torpedoe. Pakistan Navy submarine Hangor did what a modern submarine may daydream of targeting enemy’s ships. Under the Command of commander Ahmed Tasnim, she patrolled the allocated area of Indian Kathiawar coast. Hangor hit the ‘INS Khruki’ which sank merely in two minutes along with its force of 18 officers and 176 sailors on board on night of 8/9 December, 1971.

Hangor came back to Karachi safely after being submerged under water for a week in September 1971 with triumphant glory, deployed again in November 1971.

This was recorded as the first submarine kill after world war II until ‘Falklands War’ when a ‘Royal Navy’s’ nuclear submarine, HMS Conqueror, sank an Argentine cruiser, ‘General Belgrano’.

After the strategy implied by Pakistan navy lead to cancellation of  “Operation Triumph”, the third missile attack on Karachi port, which was to be launched on 10 December.

“Both the attack on an anti-submarine frigate in shallow waters and its subsequent escape unharmed speaks volumes for the professional skill, courage and patience of the crew of the submarine”

Hangor served Pakistan navy for 35 years from 1971 to 2006. She was decommissioned on 2 January, 2006 after successive years. PNS Hangor S-131 displayed as a relic-artefact at the Pakistan Maritime Museum to remind multifarious glorious past of her.

In recognition of her vigilant and bravery, was conferred by 4 Sitara-e-Jurat, 6 Tamgha-e-Jurat and 14 lmtiazi -Asnad. In her memorial contribution towards the end, Pakistan celebrates 9 December as ‘Hangor day’.