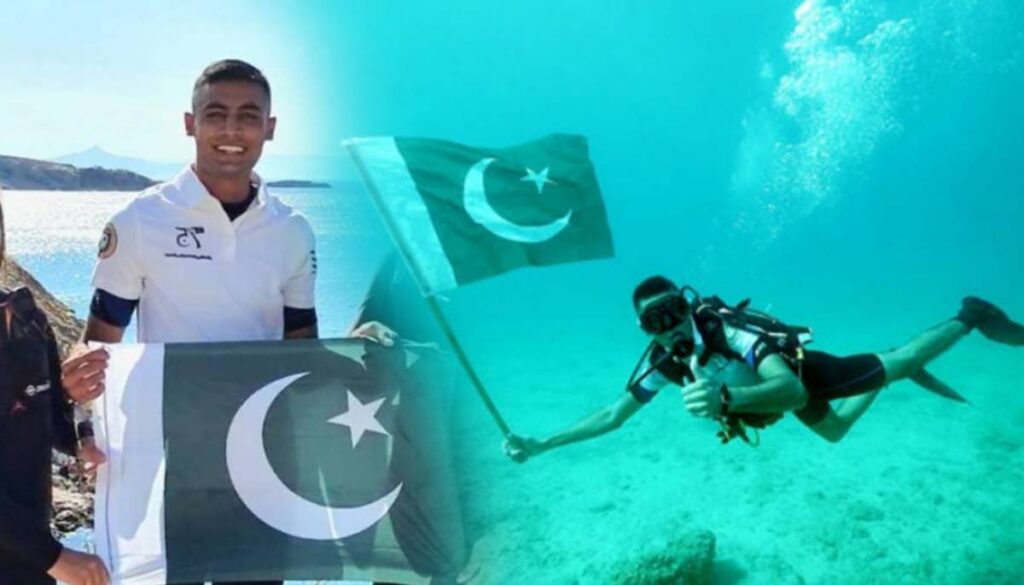 Another tribute has given to Pakistan in the most eccentric way. Ishraq Nazir hoisted the Pakistani flag underwater for 75 minutes. Greece witnessed this moment of patriotism under its water.

Pakistan got independence on 14th august 1947. After that, a lot of people came into sight to prove patriotism in the most amazing and unique ways. Some paint their homes in flag colors, meanwhile, few distribute sweets or food in green or white color. Few made cloths and distribute the or help poor on independence day to spread peace message to all over the world. This year things et a bit difference and that is for straight 75 minutes.

Ishraq Nazir is a Pakistani who lives in Athens, Greece. He is working in a well-reputed company. On the event of the 75th birthday of his hometown, he wants to do something big and eccentric. He is a trained swimmer so he planned a whole new plan to celebrate his country’s independence day.

He went to the Aegean Sea with complete preparation. For 75 minutes he hoisted the Pakistani Flag under 75 meters in depth. In the video, he posted he is seen taking the flag in his hands and waving it underwater. This is not the first time Ishraq did something different on independence day. Three years earlier he took flag to 700 meters height on plane and did a dive holding a flag in his hands.

Ishraq has a very different stance on celebrating independence day. He did unique stuff to pay tribute to all the martyrs of the armed forces. Along with that, he wants to spread out the peace message as well. He tells people Pakistan is the most peaceful yet warm country in the world. His way of conviction and dedication is truly remarkable.