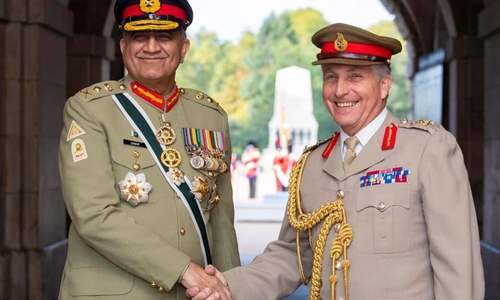 COAS Bajwa attended the passing out parade of the Royal Military Academy as a Chief Guest on Friday, he congratulated cadets, which included two Pakistanis, for completing their training.

Chief of Army Staff (COAS) General Qamar Javed Bajwa acknowledged the long-standing ties between Pakistan and UK and hoped they would one day reach “Historic Heights”.

The army leader made comments at the Royal Military Academy, Sandhurst passing-out parade where he was the chief guest

The Royal Military Academy Sandhurst (RMAS), one of the many primary schools in the United Kingdom, serves as the primary officer training for the British Army.

All British army officers, including late entry officers, as well as other overseas men and women, trained at the academy. Sandhurst is equivalent to the British Army Britannia Royal Naval College and Royal Air force College Cranwell.

Due to the pandemic, the army chief had not visited Sandhurst in the past two years but has made a regular visit since he took over as army chief.

According to the UK Ministry of Defence, General Bajwa on Friday represented the Queen at the sovereignty parade for Commissioning Course 213 (CC2123) at the Royal Military Academy Sandhurst (RMAS), attended by military chiefs from dozens of countries around the world.

It was the 198th Sovereign parade where General Bajwa became the first Pakistani to represent a sovereign.

COAS while addressing the passing out Cadets highlighted that now they will have huge responsibilities and expectations.

“The journey ahead of you is both challenging and exciting. As you grow the demand for professionalism [from the cadets] will also increase”, he said, pointing out that no one was born with professional knowledge rather “it has to be acquired with constant pressure”.

He congratulated the cadets and their families on completing their training, saying: “you are part of the finest militaries in the world that has produced great military leaders”.