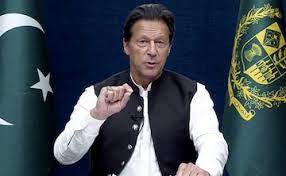 Imran Khan was ousted through a democratic, constitutional process, he has denied the legitimacy of the new government, which could lead to political violence in Pakistan. Khan has used two strategies for it’s political issue since parliament passed a no-confidence vote against him on 10 April to undermine Shehbaz Sharif’s government and to galvanize support for new elections.

As his political opponents now head a new government, Khan accuses them of conspiring with the U.S. to remove him from power and calls on his supporters to reject “foreign-imposed regime change”. Furthermore, he holds grudges against the country’s powerful military for refusing to stand by him during the standoff as well as the Supreme Court for upholding the constitutionality of the no-trust vote.

Khan’s only hope for a political comeback is to build mass opposition to Sharif’s government and force it to hold general elections well before 2023 in Pakistan. Because his relations with the top brass have soured, he assumes that the military high command will support new polls in order to prevent political turmoil.

In spite of this, he is himself sabotaging the prospects for a peaceful post-election transfer of power by refusing to accept the authority of the apex election body, the Election Commission of Pakistan (ECP).

Also See: Pakistan has to take side in China-Taiwan’s conflict

In comparison to PTIs predecessor, Sharif government has taken a resolutely different course. The country is seeking to re engage with key trading and diplomatic partners, particularly the European Union and the United States.

International financial institutions, including the International Monetary Fund (IMF) and the World Bank, have been asked for assistance in stemming the economic downturn, worsened by the war in Ukraine.

A few restrictions on media freedom have also been removed by the coalition government in an effort to improve democratic governance. In addition, it has pledged to enact legislation reforming the electoral process before new elections are held.

There is already a surge in militant violence in Khyber Pakhtunkhwa province’s tribal belt bordering Afghanistan, straining relations between Islamabad and Kabul’s Taliban-led authorities. The state’s ability to counter security threats could be weakened as a result of political polarization, which could worsen and erupt into violence.