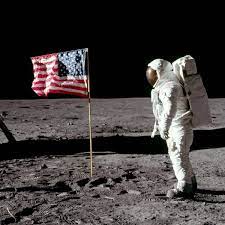 First humans to land on the moon were Neil Armstrong (1930-2012) and Edwin “Buzz” Aldrin (1930-). Armstrong walked on the moon about six-and-a-half hours later. The Apollo 11 mission occurred eight years after President John F. Kennedy (1917-1963) announced a national goal of landing a man on the moon by the end of the 1960s.

President Kennedy made this appeal to a special joint session of Congress on May 25, 1961: “I believe this nation should commit itself to landing a man on the moon within this decade and returning him safely to Earth.”

In the Cold War-era America welcomed Kennedy’s bold proposal as the US still lagged behind the Soviet Union in space developments. A five-year effort by an international team of scientists and engineers culminated in the first unmanned Apollo mission in 1966, which tested the structural integrity of the proposed launch vehicle and spacecraft.

At the Kennedy Space Center in Cape Canaveral, Florida, tragedy struck on January 27, 1967, when a fire broke out during a manned launch-pad test of the Apollo spacecraft and Saturn rocket. The fire claimed the lives of three astronauts.

In addition to five successful lunar landings, one unplanned swing-by would occur on the moon. The lunar landing of Apollo 13 aborted due to technical difficulties. During the Apollo 17 mission on December 14, 1972, astronauts Eugene Cernan (1934-2017) and Harrison Schmitt (1935-) left the lunar surface.

In today’s dollars, the Apollo program would cost close to $100 billion, and involved an estimated 400,000 engineers, technicians, and scientists. In 1961, Kennedy ordered the US to beat the Soviets to the moon, and after the feat was achieved, ongoing missions were no longer viable.