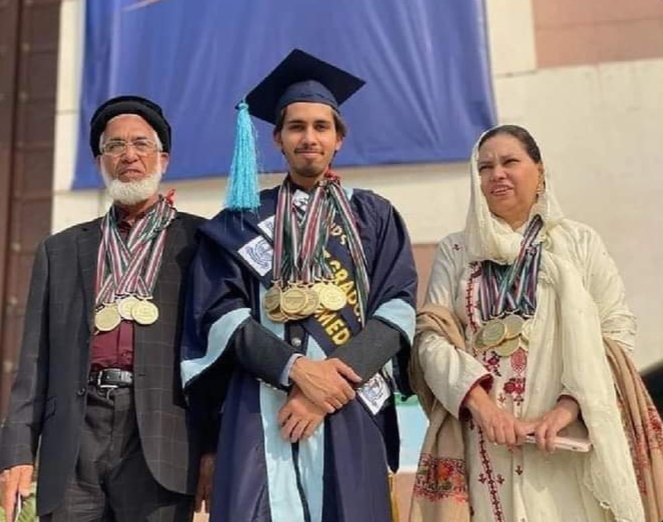 A boy from Lahore makes the nation proud in the field of medical science. Hafiz Muhammad Waleed Malik won 29 medals (27 gold, 2 silver) in the 5 years of education. He dedicated this achievement to his parents and the nation.

The MBBS graduate Hafiz Muhammad Waleed Malik got 29, Muhammad Shiraz got 21 and Dr. Asma got 10 medals in the convocations of the Post Graduate Medical In­stitute (PGMI) and Ameeruddin Medical College Lahore.

The MBBS graduate performed exceptionally well securing above 85 percent marks in thesis, practical, and viva of all subjects. Earlier, a female MBBS student from King Edwards medical college had held the record with 23 gold medals.

Waleed, while talking about his academic journey, said he was struggling in the beginning, but with the passage of time and continuous hard work managed to turn the tide. According to Waleed, he suffered some difficulties after admission, and later his hard work paid him a lot.

Prof Al-Fareed said “Obtaining medical education requires hard work, day and night study, and, a serious attitude so that you can get success in the exams by investing more time in curricular activities. Medical education is not only a means of earning name and respect in the world, but doctors also get the pleasure of Allah by serving the suffering humanity”.

In an interview, Waleed’s father expressed his happiness and said, “All my kids took medals but Waleed took more than everyone from the beginning.” Waleed’s father, a chartered accountant by profession, said he attempted to teach all kinds of principles to his children. He paid his gratitude to Almighty Allah that the next generation respects the elderly and treats young ones with affection.