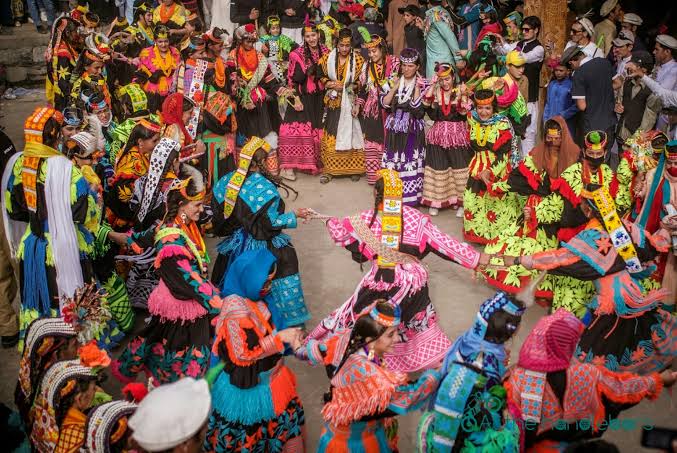 One of the famous celebrations in Kalash valley is the Choimus festival. It is celebrated to enjoy winter along with giving tributes to their gods. These festivals are the biggest occasion to find potential partners for young girls and boys.

Choimus Festival is an ancient cultural event that takes place every year around the same time in the Kalash valley, Pakistan. Kalash valleys are surrounded by the Hindukush mountains. People who live in these valleys are called Kalasha people. Who have a unique culture, traditions, and language and follow an ancient form of Hinduism. During this festival they think that their ancestor’s spirits visit them and bring blessings along with them.

During the festival, people not only drink, dance, and have fun in general. They also worship their Gods and spirits, giving offerings and even sacrifices. Also, during this festival young men and women choose their future husbands and wives.

UNESCO listed Kalash culture as an “Intangible Cultural Heritage” in 2018. The decision was announced during the 13th session of UNESCO’s Intergovernmental Committee meeting organized in Mauritius.

Kalash Winter festival is also called “Choimus” in the local language. This annually observed event symbolizes and forecasts the prosperity of the village and its people in the coming year. During the festival, People go out to seek foxes which are considered good omens. Torch-lit processions arrive from nearby villages at the main traditional dancing place called a “Charlie”. The dancing and festivities are held indoors that go late into the night as the local wine is handed around the bonfire. The locals perform rituals for purification during the festival at the dawn of the new year. The tribal elders gather at hilltops to watch the rising sun of the new year which is followed by goat sacrifices made to the Goddess, “Jastak”, and the blood is sprinkled at the temple Jastarkhan.

Special dances like Cha or Darajahilak, with traditional and modern tunes, are played to lighten up the environment. This festival goes on for 7 days and it is the best occasion to find your spouse. These festivals are the biggest depiction of kalashi culture and old myths in that region. So book your tickets as soon as possible as the festival will hit the valley on 15th December 2022.