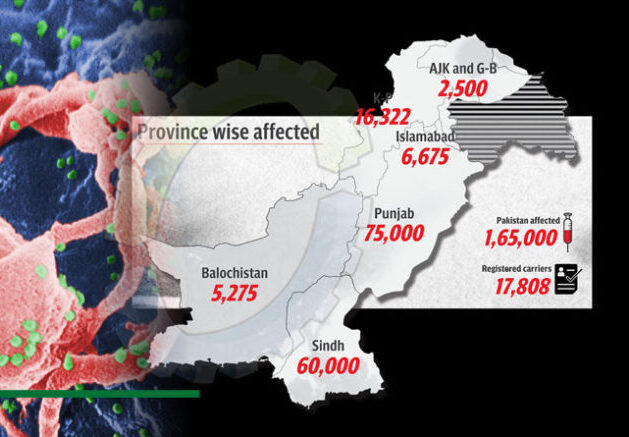 The capital city, Islamabad is facing yet another fear with its rising HIV cases. The authorities are estimating that over 800 young people tested positive for HIV in the past 1 year. HIV is a viral disease that spreads from human to human. It comes under the category of Sexually Transmitted Diseases. The disease can spread from an infected person to a healthy person through sexual contact or through using used needles. Yes, using already-used needles can also result in the transmission of this disease.

The healthcare workers are responsible for keeping us healthy. However, It is regrettable that they are the reason the disease is so prevalent in our country. They unquestionably appear to contribute significantly to the increase in HIV cases across Islamabad as well as the Country. Evidence for this can be found in the 2019 HIV/AIDS outbreak in Larkana. Pakistan experienced an 84 percent increase between 2010 and 2020 despite an overall decline in HIV/AIDS cases.

The number of HIV/AIDS cases in the country is currently around 200,000. However, authorities are actively identifying thousands of new cases each year. According to medical experts, 65% of HIV/AIDS patients do not return for treatment in Pakistan. This is due to the subpar behavior of their healthcare providers.

Another significant factor in the spread of the disease is the widespread use of contaminated medical equipment by healthcare workers. Many HIV/AIDS cases as well as other blood-borne illnesses such as hepatitis B are the result of this practice. Hepatitis B infections are also rising at an alarming rate.

However, hepatitis C cases are already among the highest in Pakistan. The authorities know that medical facilities account for more than 70% of the transmission of hepatitis B and C infections. The lack of medical professionals also makes the monitoring at healthcare facilities worse.

The stigma attached to the condition deters patients from going to clinics and hospitals to report their symptoms. This is a significant additional difficulty with the HIV/AIDS epidemic. The stigma associated with HIV in society and the potential for ridicule from loved ones and even medical professionals prevent people from receiving medical aid. The Sindhi government has recently made medication for couples and high-risk groups available.