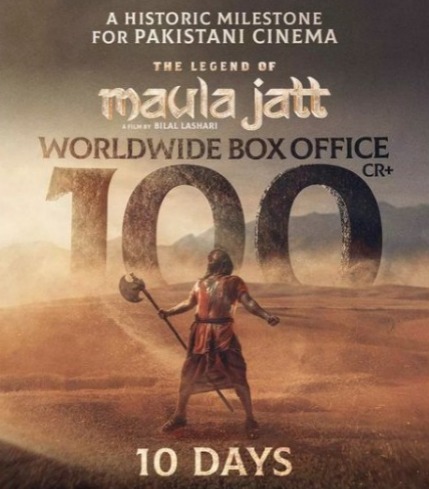 The Legend of Maula Jatt is a Pakistani movie that was released to the public a few days earlier. Pakistani dramas are one of the most watched dramas in the whole world. The casting, direction, and overall story of many dramas inspire many people all around the world. However, the Pakistan film industry did not have such a trending admiration. Mandviwalla Entertainment released the film on October 13, 2022. The film has broken many records in the Pakistani film industry till now. However, the film made another most prominent and one of the most important records. The legend of Maula Jatt is the first ever film to cross the 100 crores earning margin.

This is a historic moment for Pakistan, as the movie did the business of 100 crores in just 10 days of its release. Many around the world are considering The Legend of Maula Jatt as a cinematic masterpiece. According to the sources, the movie has earned more than 100 crores from all over the world in just 10 days. Pakistan industry released the film not just in Pakistan but in 25 other countries as well. Cinemas from these 25 countries released the movie on some 500 screens. Many believe it was the widest release of all time in the history of the Pakistan cinema industry.

The amount of business the movie did in the United States amused Director Bilal Lashari. He told the press that the number of people all over the world amused him. The support from the people for this movie is just unbelievable for him. The director said that he feels proud of the records his films have broken. Moreover, he said that this movie is the rebirth of the legendary Pakistani Cinema.

In addition to that, the CEO of Mandviwalla Entertainment, Nadeem Mandviwalla said that he has never seen any movie in his entire career perform so well. He said that the biggest cinema chains which make up almost 50% of cinemas in the country, did not support this movie. However, the amount of Box office gross earnings is much higher than expected.