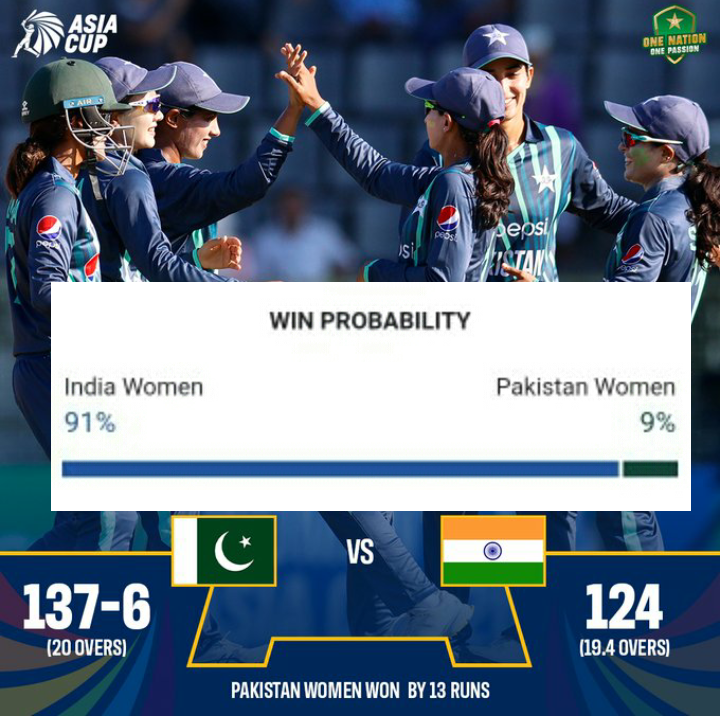 Just after a shameful defeat from Thailand. Pakistan women’s cricket team bounce back and defeated India in an interesting match. The team has wronged the prediction meter once again by a great margin.

Nida Dar produced the star turn with both bat and ball as the Women cricket team pipped India for only the third time in a WT20I encounter. The veteran struck 56* off 37 to power her side to a strong 137 for 6. She then snared the big wickets of Jemimah Rodrigues and Harmanpreet Kaur to drive her side to a 13-run win.

It was an inspired turnaround from Pakistan, which only yesterday had been bested by Thailand. Here too, they had to dig themselves out of a hole after being reduced to 33/3 in the PowerPlay after electing to bat. They had the experienced heads of Dar and Bismah Maroof to call upon. The pair stitched an impressive 76-run stand with Dar playing the aggressor. She hit five fours and a six in her knock despite not getting the flourish Pakistan required at the death. They got to a score they could work with.

After a brisk start, Sabbhineni Meghana’s attempts to hit Nashra Sandhu out of the attack backfired. Rodrigues then survived two reprieves but still fell for 2. Sandhu then dismissed Smriti Mandhana to leave India in a hole at 50/3. Curiously, the returning skipper Harmanpreet Kaur opted to demote herself down the order. A move that didn’t work on the day as Dayalan Hemalatha, Pooja Vastrakar, and Deepti Sharma became victims of a growing required rate and a stifling display of spin bowling.

Once Kaur fell with 47 still to get, the writing was on the wall. But Richa Ghosh, who had to go off the field in the first innings due to a heat stroke, kept the flickering flame alive with three sixes and a four in a 13-ball knock of 26. She brought the equation down to 18 of 10 before finishing second best in another attempt to clear the field. Pakistan romped home to victory thereafter. Women cricket team has shown their talent in the best way possible today.