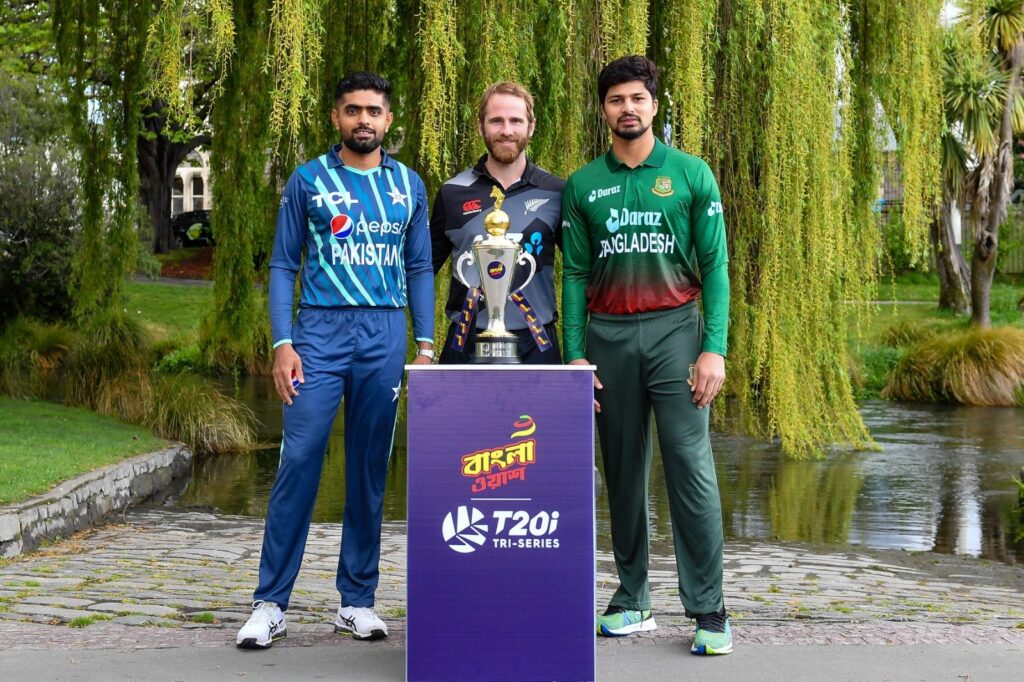 Just before the T20 world cup, three teams are ready to battle in the tri series. Pakistan, New Zealand, and Bangladesh are all set to show their world cup preparations on the ground. PCB and other cricket boards reveals the trophy along with captains yesterday.

The tri-nation series to be played between Pakistan, Bangladesh, and New Zealand was unveiled on Wednesday. With one day left to the first clash. The series will kick off with the maiden clash between the Green Shirts and Bangladesh on September 7. Fans are calling this tri series as pre t20 world cup on social media platforms.

This particular tournament in Christchurch spans seven games, seven days, and one venue. All Three teams are excited about preparation for the T20 World Cup in Australia. New Zealand has similar conditions to that Australia. This series will help the two Asian giants fine-tune their preparations before the coveted tournament.

The temperature in New Zealand city sometimes drops to 2 degree Celsius and intermittent rains have made things a bit more difficult for the Pakistani players. The Green Shirts will start practicing on Thursday (October 6), after resting today. All the matches of the tri-series will be played in Christchurch. The first fixture between Pakistan and Bangladesh is due on October 7, and the series decider on October 14. Those slated to play the ICC T20 World Cup will fly to Australia directly from Pakistan.

Pakistan and Bangladesh will be grateful to get some World Cup preparation in on that side of the world in that Hemisphere. Having played out an Asia Cup that, in its way, yielded more negatives than positives for both sides. Babar Azam and Mohammad Rizwan are good, but are they so good they cause the others to be bad? Or do they have to be so good because the others are so bad? Tune in to the next game to find out, and repeat ad nauseum.