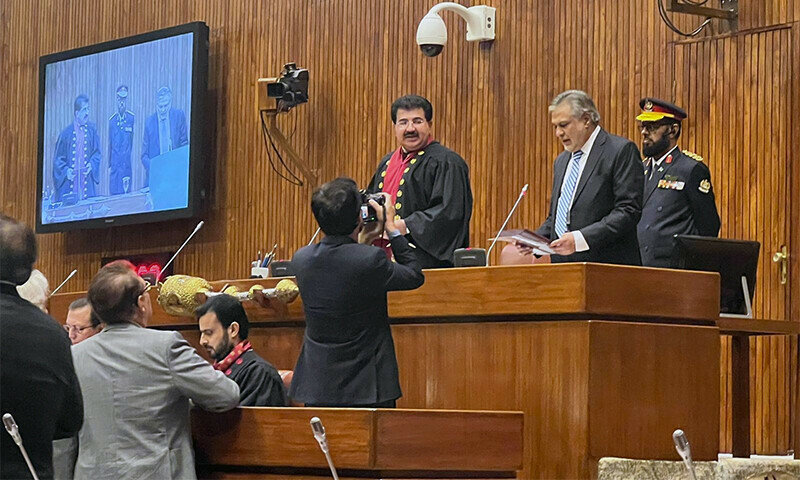 Ishaq Dar a prominent and allegedly corrupt Pakistani Politician has taken oath as Senator. The Senator returned to Pakistan from the United Kingdom after a 5-year medical leave. Ishaq Dar has become the Minister of Finance after returning, replacing Miftah Ismail. The PML-N leader left the country back in 2017. During this time he had several allegations of corruption on his head. However, he appealed for a medical leave at the time and fled to the United Kingdom to escape trial. He took his oath on 27-September as a senator. Whereas, he took his oath as Federal Minister for Finance on 28-September.

Ishaq Dar has returned to Pakistan because his own party is ruling the country. As he returned to the senate after such a long time, people from his own party welcomed him. Whereas, senators from PTI and other parties shouted abuse at him. While he was taking his oath as Senator, he was ridiculed with shouting and placards by other Senators. The Senate chairman tried to order other senators to return to their seats. But he had to call security to get the situation under control.

The debate on the return of Ishaq Dar started afterward. During the debate, a senator from PTI Shazad Waseem said that it is rather a very dark period in time for the Nation itself. Those who ran away due to a fair trial have returned and even became senators. Moreover, when Ishaq Dar left the country, many senators argued that his seat was left vacant and that someone else should take the oath and be elected in his place. But, his seat was not given to anyone else. Moreover, he argued that if he was falsely accused, why did he not stay and fight a fair trial to prove his innocence?

In response to these debates, Dar responds that he is given the task to stabilize the economy. He said that upon his arrival PKR improved by Rs. 10 against the dollar. This has helped to lessen the amount of Loans upon Pakistan by Rs. 1350 billion. He told the opposition leaders to wait and observe the effects of his arrival.