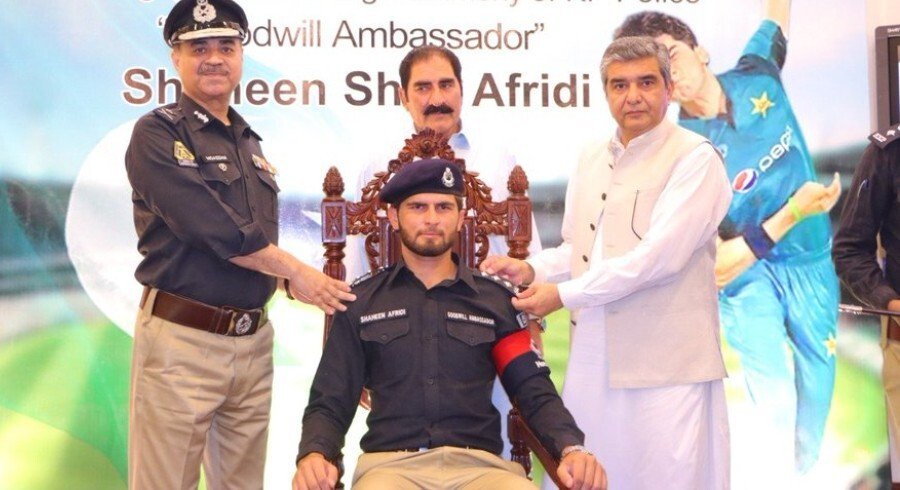 Shaheen Shah Afridi is a young and talented Pakistani cricketer. Today, the KPK Police force awarded him the honorary title of DSP. This is a truly momentous occasion, not just for Afridi but for Pakistan as a whole. Shaheen Shah Afridi who is only 22 years old, has already made a huge impact on the world of cricket. In addition to being an aggressive bowler, he is also an aggressive batsman. He also enjoys fame due to his engagement with Shahid Afridi’s daughter.

After wearing the badges, Shaheen presented a salute to his father. “Wearing the uniform of the brave force and becoming its goodwill ambassador is an honor for me. The KP Police have offered supreme sacrifices in the last many years and I am proud to be representing it all over the world,” said Afridi, who was wearing a uniform of a DSP during the function.

IG Police said that different sports champions have emerged in the region in every era, including squash, hockey, cricket, volleyball, football, and almost all sports. Khyber Pakhtunkhwa players from all over the world have joined the country and the nation.
IG Police said that just as Shaheen Shah Afridi led Lahore Qalandar and made him the PSL champion for the first time. He improve the image of police force after becoming the goodwill ambassador of Khyber Pakhtunkhwa Police.

Young blood Afridi bagged the Sir Garfield Sobers Trophy for the ICC Men’s Cricketer of the Year. He took 78 wickets in 36 internationals at an average of 22.20 with best bowling figures of 6/51.

Lahore Qalandar skipper is the youngest cricketer to win the elusive award, while also being the first Pakistan player to achieve the feat.