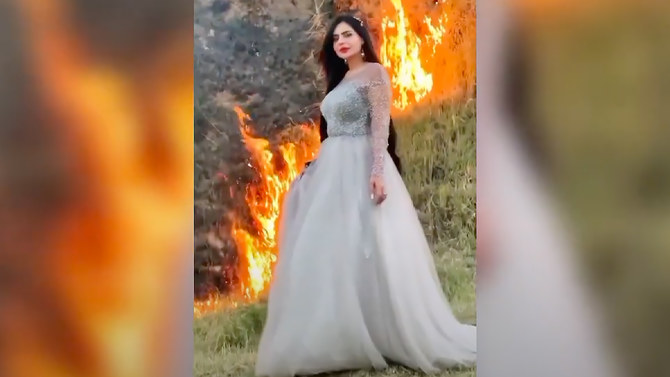 The flames of bad publicity can be fanned, but not those of global warming. In crowded rooms, the name TikTok often causes brows to furrow when it is mentioned. TikToker Dolly poses in front of a burning resource to gain likes, which baffles even followers of the social media platform, tiktok.

She captioned the content of her TikTok video. “Fire erupts wherever I am,” with a picture of a burning hillside on Margalla Hills as the backdrop. Humaira Asghar, known as Dolly on social platforms, posted the clip on May 17 to TikTok.”

TikToker Dolly has been charge under the wildlife and environment protection laws. For setting fires in the Maragalla forest on the complaint of the Capital Development Authority (CDA).

An assistant director of the CDA informed the police, in a first information report (FIR) filed at Kohsar Police Statio. That a TikToker named Dolly seen recording a video after setting the forest on fire in a video that has gone viral on TikTok.

Several influential figures also contributed their opinions to the debate after the video went viral. The issue has been raise by celebrities such as model Mathira and actors Ahmed Ali Butt and Mariyam Nafees.

It is nerve-wracking to see such ignorant behavior from anyone in a world constantly reminding. Its citizens that we are facing a climate crisis that is only going to get worse from here. There may be a lack of awareness when it comes to the long-term effects of climate change. But its consequences have already begun to manifest.

Using nature as a prop in such a destructive way is extremely concerning. And it should not be deal with penalties alone. Netizens are calling for not only punishment, like a TikTok ban, a TikToker ban, or even a fine plus arrest. Bans, however, have proven time and time again that they do not address the root cause and merely suppress the issue at hand.

Targeting the root of the problem would be more effective, so the people’s awareness of the dire consequences would act as a deterrent.