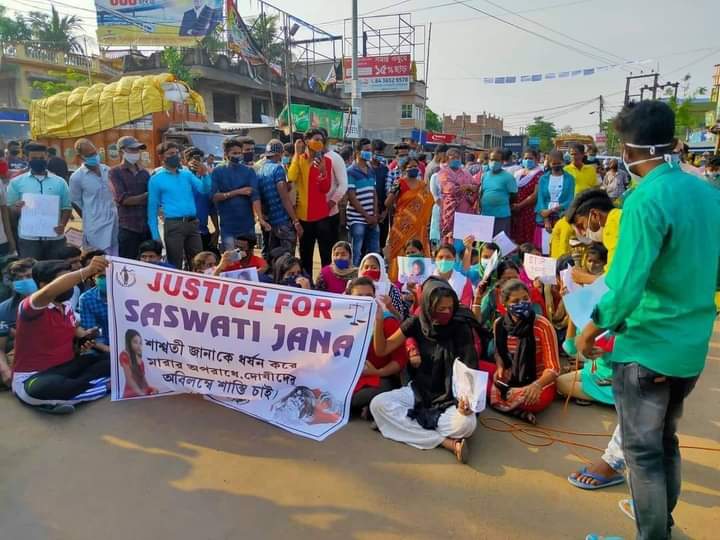 Just before the elections, a new controversy is affecting the Indian Government. 21 years old Saswati Jana’s kidnapping and brutal rape is new news all over the country. Social media is demanding fair justice for the poor soul and her family.

West Bengal, an incident of rape and murder has come to the fore from the state’s West Medinipur district. A second-year college student Saswati Jana belonging to the SC/ST community, has reportedly been brutally raped and murdered in Jamna village in Pingla block, Kharagpur subdivision of the Paschim Medinipur district in the state of West Bengal.

According to news reports, the 21-year-old student Saswati Jana of Debra College in West Medinipur had gone missing on Monday (May 3) afternoon. When she did not return home until evening, her family members started looking for her. After much searching, the girl’s body was found in an abandoned mud house adjacent to a newly constructed house. The girl’s body was in a very bad state, according to reports and findings.

The family of the deceased claimed that she was killed after being brutally raped. After learning about the incident, Pingla police reached the spot and sent the body of the deceased for post mortem.

Based on FIR filed by the victim’s family at Pingla police station, the local police arrested two masons and their female aide, who helped in the construction work of the house behind the deceased’s kaccha house. Their names are Bikash Murmu from Belda, Chhotu Munda from Jharkhand, and Tapati Patra from Sabang.

According to reports, additional SP, Kharagpur, Rana Mukherjee said that the accused have confessed to the crime. While Bikash and Chhotu raped the girl, Tapati kept a watch outside to door. Moreover, The autopsy report has confirmed rape, said the IPS officer, furthering that the police are reconstructing the crime scene to investigate the murder case.

Political war in the region

According to sources a lot of rumors are circulating in the region in this scenario. Some say the girl was a BJP supporter, or some say her father was a BJP supporter. That’s why she has to face such a brutal situation. However, social media is raising its voice to get her justice and compensation. The family is still in shock and grief. They are looking toward the ruling party to get some hope and warmth. Other rumors are the girl was Christian or Muslim that’s why the attack happened.

TMC the ruling party is denying the fact that their goon did this horrendous act. They are saying that they won’t do such acts just because the people are not supporting them. However, people are convinced that this whole act was because of political differences. Mamta Bannerjee, chairman of TMC is looking into this case herself. Post or Pre elections, these types of incidents are really common in India. This destroys the peaceful face of the country worldwide. If TMC cannot solve this murder case vigilantly, the next elections would be tough for them. BJP gets the sympathy votes, moreover, more seats than TMC in their hometown. Social media is raising its voice and is keen to provide this poor soul a fair share of justice.