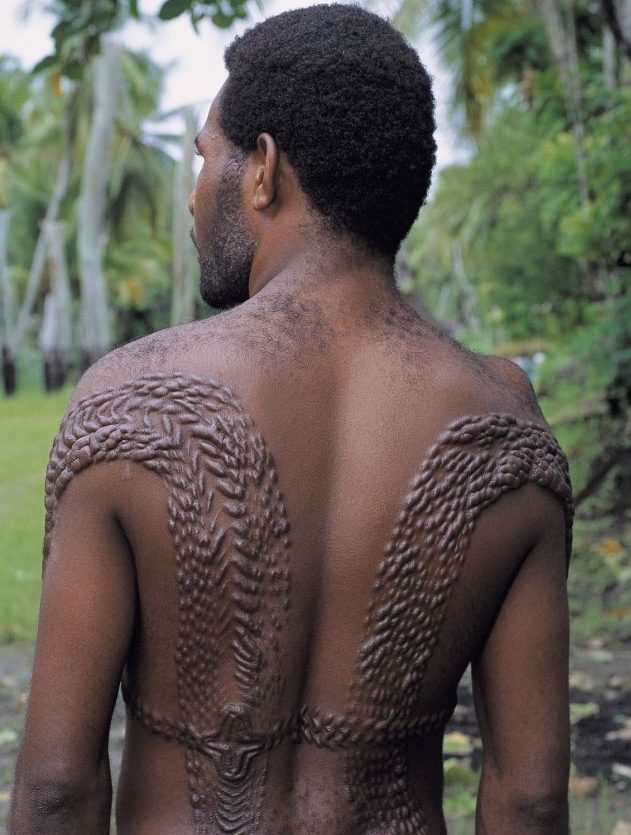 “Crocodile is a symbol of power” this phrase is a foundation of this ritual that turns men into crocodile men. This brutal scarification is one of the famous and mandatory practice in the tribes of Africa.

World is full of mysteries and surprises. Every region and group has their own kind of unique way of living and thinking. Leading to this theory a tribe is Africa surpasses to all. Chambri tribe in Papua New Guinea near Sepik River follows this brutal fashion in order to turn boy into men. They are doing this for decades and it is one of the most sacred ceremony in the tribe. They cut their skin in a manner that will look like crocodile skin after healing. Locally they call those men as crocodile men. Boys from age 11 to 30 years can do such things to their bodies in order to get that title.

The origion of this ritual is still unknown. But according to their elders and ancestors they are the descendants of a crocodile. Crocodile is a sacred symbol for them. One of their famous proverb is “Crocodile gives us power”. According to one saying is after death, man turns into crocodile and then crocodile gives it the strength to reborn with more wisdom and energy. In simple words crocodile turns boy into men that can handle any life’s problem with ease. Main concept of this is the mother’s blood will extract from boy’s body and now he can create his own manly blood in himself.

For this Uncle of the boy takes him to Spirit homes. Spirit homes are specially designed for this ritual following all the religious procedures. In old days they uses Sharpen Bamboo Razors for this process. But now they uses blade razors for more precision and accuracy. It is generally a process of 6 Weeks before the Initiation ceremony. The whole procedure can take up to 2 Months. Boy has to live in the spirit homes for at least 6 weeks.

After the initial preparation they cut skin in such order that it starts resembling to crocodile skin. They scars chest, back and buttocks of the boy. They do not use any sedative or pain killer during or after the process. The tolerance of boy is the real exam in this brutal practice. Some boy passed out in order to bear such pain. The only pain relief they can use is to chew medicinal plant leaves to lessen the pain. After scarring they smoke them to blow up the wound. After that they put River side Clay and Tree Oil on the wounds in order to keep them arise like scales on the crocodile. It also prevent them to get any fatal infection.

After the healing boys also learns major life skills in the spirit homes. They learn fishing, carving, gaining knowledge from spirit homes, how to take care of wife and kids, etc. In other words how to become a man in real world. After the process they ornate with headdresses, jewelry and they can take part in major tribal festivals. A brutal yet fascinating incident that can change the whole life of a boy in few days. That’s Africa for the world with their unique takings on life.