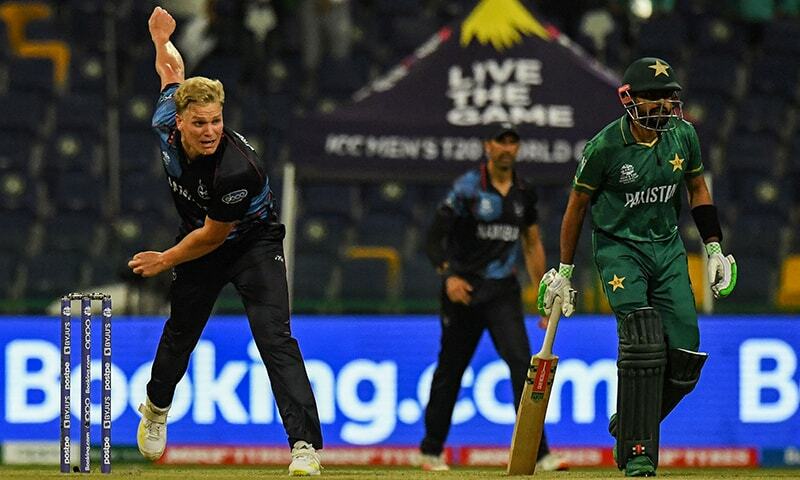 Pakistan in its match against Namibia was able to bag an easy win with 45 runs. With this victory, the green shirts were able to continue their unbeaten streak in the WTC20.

The match since the start was in the hands of the Pakistani team. Pakistan after winning the toss decided to bat and was able to give a target that was almost impossible for Namibia to chase.

Starting off for Pakistan came in the amazing opening duo Babar Azam and Muhammad Rizwan. Both Babar and Rizwan throughout the first three overs played in a defensive manner and scored only 6 runs. However soon after the initial overs, the duo started to score consistently and brought up the score to around 60 in 10 overs.

Babar after the 10th over was just 6 runs away from a half century and soon completed it. Rizwan who was sitting at 24 runs till the 10th over also started to smash consistent boundaries. Up until the 14th over Babar had around 70 runs while Rizwan had 41, the teams total was 114. Babar however got caught out in the first ball of the fifteenth over. Fakhar came in after Babar but was quickly sent off.

Next came in Shoaib Malik who alongside Rizwan smashed a whole lot of boundaries in the last few overs. Rizwan completed his half century by the 19th over and Pakistan’s by the 20th over managed to make 189 runs. A target that surely was one difficult for Namibia to chase.

2nd Innings: A successful attempt by the Namibian team

Namibia though was exception in their fielding and balling. Their batsmen ship was what would have determined the game. The opening batsmen were Stephan Baard and Michael van Lingen. Stephan played 29 balls and managed to score 29 runs, with 1 four and 1 six. He was run out by Haris Rauf. Michael on the other hand 2 balls and made 4 runs before he was bowled out by Hasan Ali.

Craig Williams, Gerhard Erasmus, and JJ Smith made 40/37 balls,15/10 balls 2/5 balls each before they went back to the pavilion. The game ended with David Wiese and Nicol Loftie-Eaton on the pitch and Namibia scoring 144 runs with 5 wickets down at the end of the 20th over.

Pakistan led to another victory. However, the interaction on the pitch between the two teams after the game made us realize how cricket is not a war but something that brings countries closer.