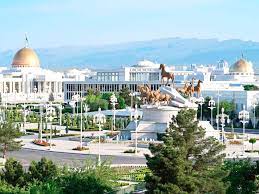 According to the Mercer Cost of Living Survey 2021, which included 209 cities across five continents. It measures the comparative cost of more than 200 items like housing, transportation, food and more.

The annual report ranks 209 cities based on the cost of expenses such as housing, transport and food. In the top of the list the most expensive places to live right now is

Turkmenistan’s capital, Ashgabat has been named the Most Expensive City to live. According to Mercer’s 2021 Cost of Living city ranking. Mercer said it evaluated more than 200 goods and services for the report. It is designed to help companies and governments around the world determine how much they should pay expatriate employees.

Expatriates, or expats, are people who live or work outside their native countries. Most of the cities in Mercer’s top 10 are business hubs where economic growth has led to a hike in the price of housing and other living costs. But Ashgabat owes its high ranking to economic woes rather than prosperity, making it an outlier.

Hong Kong dropped to second place, previously having the number one title in 2020. It switches spots with the Turkmenistan capital, which ranked second last year.

The report ranks 209 cities by evaluating the cost of expenses from categories such as housing, transportation, utilities, food and domestic supplies. The survey aims to help employers determine compensation strategies for international employees worldwide.

In third place, Lebanese Capital city, Beirut climbed a whopping 42 positions in ranking due to political turmoil-induced record-high inflation. The sustained crises of Lebanon have seen the nation’s capital become one of the world’s most expensive places for migrant workers to live, according to a new report. The Middle Eastern hub rose more than 40 rungs on the latest Mercer Cost of Living City Ranking.

Beirut has become the most expensive city for expats in the Middle East and North Africa region. The third globally, based on the latest “Cost of Living” survey by consultancy Mercer.

Jumping 42 places in global rankings, Beirut has been at the center of Lebanon’s economic and political collapse, aggravated by the COVID-19 pandemic and the port explosion last year. Living in the Lebanese capital as an expat has now become more expensive than living in Tokyo, Zurich, or Shanghai.