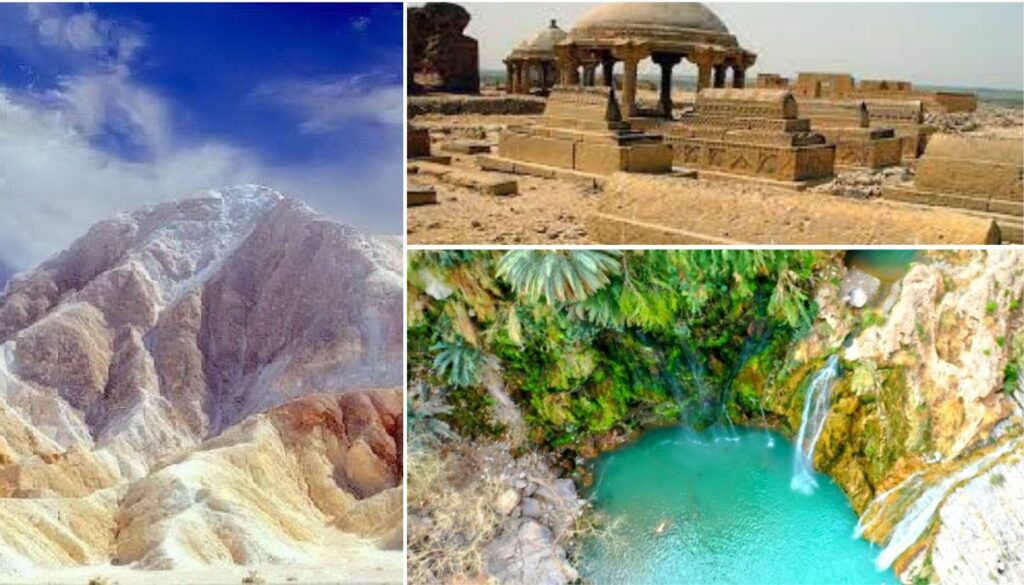 Can’t decide your next adventure destination? Try out one of these weirdest places . you’ll surely be surprised by weird places in Pakistan

We are sure you might have seen quite a lot of interesting places all around the world. While some of them amaze you, others leave you wondering about how and why they exist. You will surely be amazed to know that a lot of these mind boggling weirdest places exist in Pakistan.

Pakistan is a country that is full of beautiful and unexplored places. The natural beauty of Pakistan, is beyond compare, with a diverse typography and culture a lot of cool places can be found in the country. Listed here are 5 most weirdest places in Pakistan. Perfect for adventure, these beautiful places in Pakistan are waiting for you to explore and learn about them.

1. Pir Chattal Noorani Gandhawa: A breathtaking oasis in the middle of Balochistan

Deep in the heart of the Kachhi district in Balochistan lies ‘Pir Chattal’ which is a shrine of the famous ‘Pir Chattal Shah Noorani’. The massive Kirthar mountain range overlooks the shrine, throughout the whole locality are located tall and beautiful date trees. So what’s so amazing about the shrine you might ask?

Well, the hundreds of years old shrine has a natural and beautiful water body which surely is a sight to see in the arid desert. The presence of a waterbody surrounded with beautiful date trees in the middle of the dry area isn’t the only cool things about this place. The small waterbody in Pir Chattal contains unique fishes that are 2 feet long and can harm humans. According to different stories, these unique fishes were sacred to the Pir and he forbidden everyone from hurting or eating them.

2. Koh-e-Suliman: An ancient mountain that beholds many of history’s secrets

Located in both Pakistan and Afghanistan, the Koh-e-Suliman is a north south extension of the Hindu Kush mountain range. This mountain has been here since a long time and has an unmatched beauty. Many great foots have set upon the Koh-e-Suliman.

Some historians and story tellers also claim that Prophet Noah and his companions settled at the Koh-e-Suliman after the flood ended.

Located in the mega city of Karachi, the Mohatta Palace is built in a posh area of the city. The Palace originally built in 1927 by a Marwari business man and was used a summer home by his family. The family eventually left the Palace after migration to India in 1947. The beautiful palace was then acquired by the State of Pakistan and is now under the Sindh Government. The palace has also served as a residence to Fatima Jinnah.

While this was all a basic background to the beautiful and posh residence. This palace that looks stunning from the outside is just as spooky from the inside. The palace is said to be haunted by different ghosts which includes ghost of British women and officers. Almost all people visiting the residence report to have a strange feeling, while some have also reported paranormal activities.

4. Mohenjo Daro: A city built in 2500BCE but surprisingly has a weirdest modern infrastructure

Mohenjo Daro is an ancient city situated just a few kilometers from Larkana in the province of Sindh. It is built in 2500 BC. The Mohenjo-Daro is one of largest settlements of the Indus Valley Civilizations. This ancient city was discovered in 1920’s. Whole city was discovered after proper excavation. It was designated as a world heritage site in the 1980’s.

What makes this ancient city so special is the fact that despite of it being so old, it contained an infrastructure similar to modern times. The city was home to a population of 40,000 people and homes. It has proper buildings structures. The city even shows traces of luxuries like public pools and proper drainage system.

5. The Makli Graveyard: An ancient cemetery no one dares to visit at night

Located just 10km to the city of the Thatta, the Makli is one big graveyard. The site served as a graveyard for the Mughal rulers for around 400 years. Famous scholars, Sufis and rulers are all buried in this graveyard. The site is discovered during excavation in the 19th century. It contains geometrical buildings and beautifully carved tombs.

While the beautiful old buildings and graves surely are a sight to see, the graveyard does not get any visitors during the night time. Reported as severely haunted and it is consider among weirdest places.

Most Famous Paintings In The World

Best Airports in the World