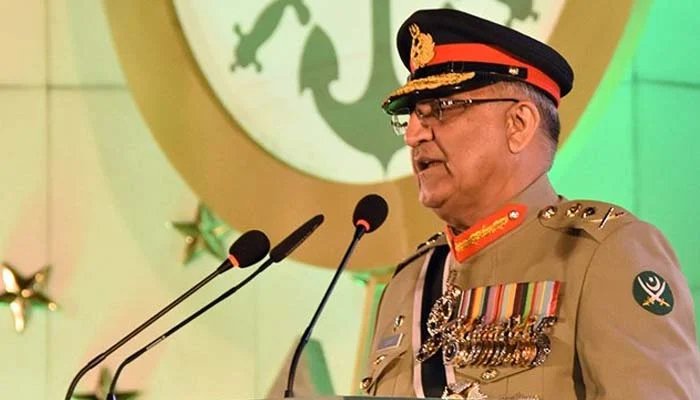 Army Chief, Qamar Javed Bajwa addressed an event on Defence Day. The COAS in the meeting gave a shut up call to the growing extremism, violence and blackmail in the country.

ISLAMABAD, PAKISTAN – On Monday 6th September, the Army Chief Gen. Qamar Bajwa addressed an event organized on the occasion of Defense Day. The COAS in his address talked about a lot of things, however one main topic of his speech was the increasing spread of propaganda, blackmail and extremism in the country.

The event was organized at GHQ in Rawalpindi. Alongside the COAS three other service chiefs, the cabinet and President Arif Alvi were also present.

Qamar Bajwa in his speech said, “No person or no group will be allowed to blackmail the state on the basis of regionalism, linguistics, ideology or religion. There is no room for any more violent behavior or extremism in Pakistan”.

COAS then moved on to discuss the sacrifices made by thousands of military personals who have given their lives to protect our homeland, Pakistan. He called the protection of the homeland to be a sacred duty that is more important and dearer than life itself.

The Chief then reminded people about all the war sacrifices that the country has made since its foundation. “The sacrifices of our martyrs are an expression of the same spirit of love for our homeland. Our elders lit the candle of freedom with their sacrifice, which faced severe trials from the beginning. Be it 1948, September 1965, or the 1971 war, the Battle of Kargil or the long-running war on terror” said Qamar Bajwa and reminded that Pakistani forces during all these times were and still are ready to sacrifice their lives for Pakistan.

The COAS alongside President Arif Alvi also put up flowers and offered prayers for late soldiers at the Martyrs memorial.

Gen. Bajwa said that the security and peace of Pakistan are dear under any circumstances. He also called out the hatred against factions and religions in the society saying that the love for homeland is greater than any personal group formed on the basis of religion and language.

The Army Chief then moved forward and talked about the 5th generation or propaganda warfare. These warfare basically spread misinformation, propaganda and hate amongst people of a country. Thus making them fight each other and causing the country to weaken its roots.

Gen. Bajwa said that our enemies want to achieve their aims through tactics such as propaganda and misinformation. “We all have to deal with the fact that some people are being used under the banner of anti-national elements. It is called hybrid or fifth-generation war. Its purpose is to hollow out the roots of Pakistan and damage the country’s integrity”, added the COAS.

The Army Chief then went onto talk about the solutions and ways that Pakistan can effectively fight a fifth generation war and stand together as a country. He said, “We must work on geo-economic priorities, regional integration and the acquisition of modern technology” and said that its the geopolitics against each other that we need to end.

“I believe that education, health, infrastructure development, population control, and climate change should be our priorities”, he added.