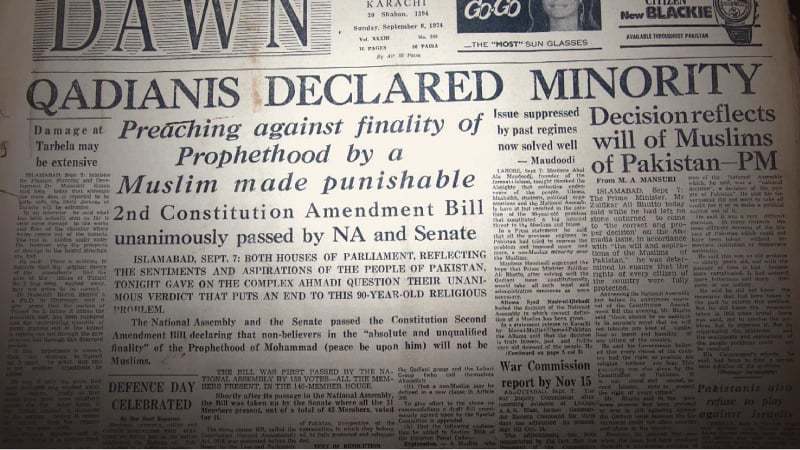 Ahmadi or Qadiyani, rather a new controversial branch in Islam – Almost 37 years has passed since they declared Non Muslims.

ISLAMABAD, PAKISTAN – Islam is one of peace loving religions in the world. A lot of branches of Islam exile in the world. There are Sunni, Brailvi, Ahl e hadith etc. But there is one group that is most controversial – ”Ahmadi or Qadiyani” sect of Islam.

Qadyanis rose in 1988 in sub continent. Basic crux of their belief is they accepts Allah, His Prophet (SAW) but along with that, they add Mirza Ghulam Ahmad as their last prophet, not Muhammad (SAW). They do not believe in the eternity of Our Last Prophet (SAW). By norms they call themselves as a branch of Sunni sect. But most of the Muslims specially in Pakistan, declare them as non-Muslims.

7 September, 1974 is considered a historic day in Pakistan. Today Ahmadis/Qadiyani were declared as non Muslims and they could not call their prayer areas as Mosques. Right after the independence, this issue started rising. But in 1953, a major riots started against Ahmadis. Around 200 Ahmadis killed in these attacks. Different groups started agitations against them. They destroyed their properties and targeted them with violence to remove their blasphemous beliefs. But due to political intervene the voices crushed.

In 1974, Pakistan People’s Party took an initiative to put this dispute at rest. At that time Qadiyanis has a strong hold in almost every field of society. They started to change basic beliefs in books and schools. Zulfiqar Ali Bhutto Called a cabinet of scholars and religious experts. Two main Religious Parties Majlis-e-Ahrar-e-Islam and Jamaat-e-Islami started a violent campaign against Ahmadis. In the result of clash a lot of Ahmadis died. After that it was important to end this dispute once and for all.

Declaration and After results

After a lot of discussion and backlash Cabinet was ready for second amendment in constitution. They added a clause in the constitution as a definition of Muslim. After that Muslim is only who Believes in Allah, and Accepts that Hazrat Muhammad (SAW) is the last prophet of Allah. After this declaration they could no longer call their prayer homes as Masjid, Can no longer use religious terms for their own beliefs.

Saudi king, Shah Faisal was the confidant of Bhutto at that time. He supported him to take this difficult step. That results in the greatest achievement of his political party so far.

Current state of Ahmadis in Pakistan

Pakistan still holds the largest number of Ahmadis in it. There are around 5 to 6 million Ahmadis residing here. They now are called as minorities under the constitution of Pakistan. They are allowed to practice their offerings without calling themselves Muslims. Dr Abdus Salam who is the first Pakistani who won Nobel Prize, was also a Ahmadi/Qadiyani. He won Nobel prize in the contribution the electroweak unification theory. When he died the Muslim was pried from his tombstone.