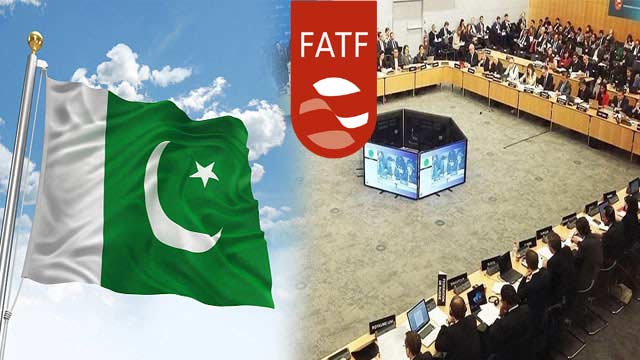 PARIS, FRANCE – Financial Action Task Force (FATF) on Friday announced that Pakistan has been able to successfully comply with 26 of the 27 points by them. However they will still continue keeping Pakistan on FATF Grey list. This decision was taken because one of the most important points given by FATF – related to combating the financing of terrorism silll needs work.

”The Pakistani government has made substantial progress in making its counter-terrorist financing systems stronger and more effective. It has largely addressed 26 out of 27 items on the action plan it first committed to in June 2018,” Dr Pleyer. ”The plan focused on terrorist financing issues.”

He pointed out another factor that still needs the attention of Pakistani Government, “Which concerns the investigation and prosecution of senior leaders and commanders of UN designated terror groups“.

“These include clear efforts to raise awareness in the private sector to Pakistan’s money laundering risks and to develop and use financial intelligence to build case.”

“However Pakistan is still failing to effectively implement the global FATF standards across a number of areas. This means the risks of money laundering remain high which in turn can fuel corruption and organised crime,” Dr. Pleyer during the conference.

Pakistan’s current Government under the prime minister ‘Imran Khan’ did work hard to implement the 27 points given by FATF. By June of 2021, Pakistan implemented 26 of the 27 points. This was quite an effort by the country and thus the government and other officials expected to hear some good news from FATF. However things took a bad turn for the Pakistan and its current government.

A list of six items is given to Pakistan to be removed from the FATF grey list. It also has to implement these six new point. These points will help Pakistan overcome AML/CFT deficiencies:

(2) Demonstrating that assistance is being sought from foreign countries in implementing UNSCR 1373 designations;

(3) Demonstrating that supervisors are conducting both on-site and off-site supervision commensurate with specific risks associated with DNFBPs (Designated Non-Financial Business and Professions), including applying appropriate sanctions where necessary;

(4) Demonstrating that proportionate and dissuasive sanctions are applied consistently to all legal persons and legal arrangements for non-compliance with beneficial ownership requirements;

(5) Demonstrating an increase in ML (money laundering) investigations and prosecutions and that proceeds of crime continue to be restrained and confiscated in line with Pakistan’s risk profile, including working with foreign counterparts to trace, freeze, and confiscate assets; and

(6) Demonstrating that DNFBPs (Designated Non-Financial Business and Professions) are being monitored for compliance with proliferation financing requirements and that sanctions are being imposed for non-compliance.

How did Pakistan ended up in FATF Grey List?

In the June of 2018, Pakistan was included on the FATF grey list. Pakistan was put under increased monitoring to prevent illegal activities like money laundering, drug trafficking, smuggling and terrorist financing. The term ”Grey List” means the country have had access only high-cost debts. Pakistan governments (current and previous) have been struggling with dealing the high debts and liabilities as big as Rs 45.470 trillion in the form of financial aids.

When put under the FATF’s grey list any country does suffer a lot. Pakistan has suffered upto $38 billion economic losses since the ”Grey Listing” in 2008. Trade opportunities with other countries decreases thus shrinking the economy which then causes problems like unemployment and poverty. When including Pakistan on FATF grey list the country was given a total of 27 requirements by FATF which had to be fulfilled for the country to be removed from the list. If not the country will be put into FATF’s black list which surely will be bad for Pakistan.