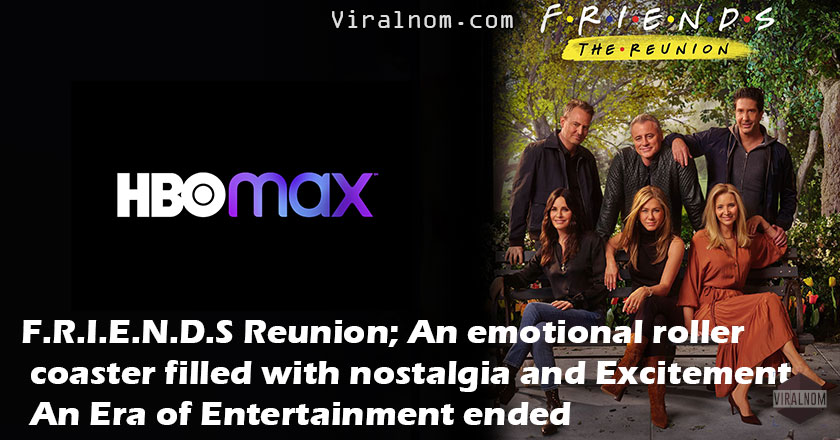 CALIFORNIA, UNITED STATES OF AMERICA – The most famous and loved Sitcom ‘’F.R.I.E.N.D.S’’ had a special episode lined up for the audience named as Friends Reunion aired on May 27, 2021 on HBO. The special episode was streamed by more than 1 Million viewers in less than 6 hours.

All the caste leads of the series, Jennifer Anniston, Courtney Cox, Lisa Kudrow, David Shwimmer, Matthew Perry and Matt LaBlanc gathered on the set of the play, at Warner Bros Studios in Burbank. All six of them looked extremely thrilled and emotional while meeting each other and the rest of the crew on set. ‘I am having so many flashbacks while walking here’ said David.

The audience was rooting for this all-the-cast-under-one-roof thing for 27 years since the last episode of season 10 of FRIENDS. on-aired in 2004. The Reunion, was announced to be an interview and it was assured that one should not assume that this special episode would lead to another series. Marta Kaufman, F.R.I.E.N.D.S. Producer, exclaimed that the team is happy with how the storyline ended in the last episode of season 10 and they are in no mood to restart another season.

Since the episode was executively produced by all the star cast of the season, the episode also consisted of a part of Late Late Show hosted by James Cordon.

FRIENDS Reunion guest stars who made an appearance include:

Guest stars who never appeared on FRIENDS Reunion. (and perhaps some of which weren’t even born when the show first aired in 1994) include:

The biggest highlight of the interview was David Schwimmer admitting his feelings for Jennifer Anniston throughout the season. Jen said the ‘’Crush’’ was reciprocated but they both never encouraged the tension. The public was both surprised and in awe to see real-life Rachel and Ross romance if the crush turned into a relationship.

The cast members played several activities that were iconic from the show, such as playing the game from the show which made Joey and Chandler win the apartment, re-read and performed the scripts of some iconic scenes again and brought back all the golden memories of the show.

The episode crossed 1 Million viewership within 6 hours and made the cast members earn a fortune. It has been confirmed that each one of the star cast member earned from $2.5 to $3 Million from the reunion interview.

The beauty of F.R.I.E.N.D.S. is it’s been off-air since 2004 but people still tend to watch and relate to the characters and the story. People find the show associative to their society and that’s what makes it evergreen. Viewers from all over the world exclaim that the show have helped them in many ways; to combat depression and other mental strains, to get past a trauma of their loved ones, to believe in friendship and in hope and to believe that love still pertains in the society.