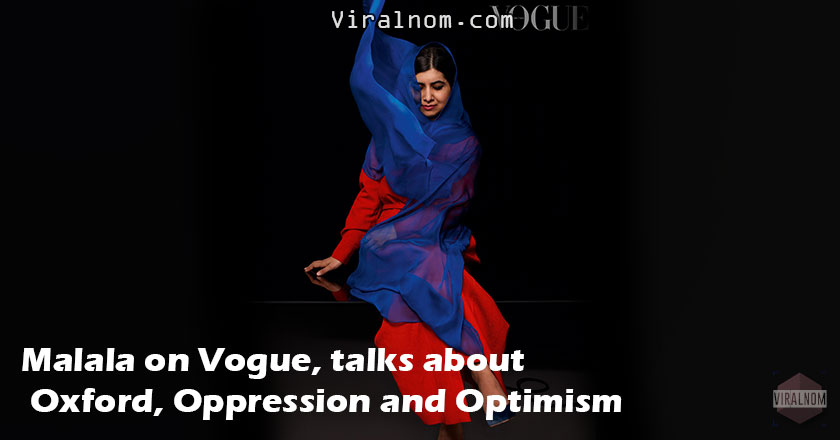 Pakistani Nobel Laureate, Malala Yousafzai became the cover star on the cover of British Vogue for its July 2021 addition, exclaimed in the interview, ‘’I know power of young girl’s heart’’.

The 23 years old Malala, featured in Vogue, graduated from Oxford last year in Philosophy, Politics and Economics. She is one most of the most prominent Oxford graduates of all times. In her interview, she talked about her experience while studying in the prestigious institute. She told how normal she felt among her fellows in the university and how she felt excited in the environment.

“I was excited about literally anything – going to McDonald’s or playing poker with my friends,”

“I was enjoying each and every moment because I had not seen that much before. I had never really been in the company of people my own age.”

She further added that she had never really been in the company of people her own age since she has so much on her plate – recovering from the incident, and travelling around the world, publishing a book and doing a documentary and graduating.

“At university I finally got some time for myself.” Malala.

Ms Malala was 14 years old when she was shot in the head by extremists for campaigning for education for young girls in her native town in Swat. Malala has been a symbol of Valor and resolution since then.

She wore hijab in her recent shoot with vogue and remarked it as a cultural symbol. Further, she added that a piece of cloth on her head must not be symbolized with ‘’Oppression’’.

Sheding some light on her friendship with Greta Thunberg and expressed that the young activist is in her close connections. She even texts her for a good advice.

‘’I know the power that a young girl carries in her heart when she has a vision and a mission – and I hope that every girl who sees this cover will know that she can change the world.” Malala in her interview.

She published her memoir ‘’I am Malala’’ in 2013 which was a big hit and a bestseller and she did a speech in UN on her 16th birthday, starting a trust named ‘’Malala Fund’’. The purpose of her NGO is to ensure education for young girls living in the underprivileged parts of the world. The NGO is operating within 8 countries including Syria and Palestine. She has donated $150,000 for the children in Gaza in the recent calamity.

Malala, being the face of activism for many years, commented that today’s activism and do-gooding is not productive and worthwhile. All the activism is associated with mostly ‘’Tweets’’ and nothing on a solid ground. We need to change the new trend and be more strong and upfront in reality in order to make our voice heard and bring the change.