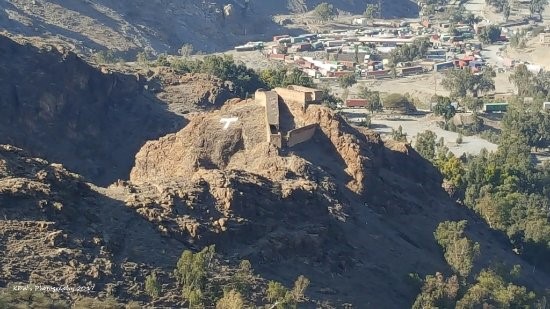 Tamerlane Prison is situated near Torkham border, located at Pak-Afghan border. A forgotten archaeological sites fading away in Khyber agency Pakistan. The prison is 400 years old build by Timur, a Turco-Mongol conqueror. It is regarded as the symbol of terror, mystery and solitariness.

Timur, also known as Tamerlane, was a Central Asian ruler and warlord who lived in the 14th and 15th centuries). The prison is named after Timur emperor at the time of his Enthronement.

A horrific tunnel is situated in Tamerlane prison. It takes 15-20 mins drive from Landi Khana with hike of 20 mins at least. On the hilltop, slightly on the left side there is present a slope tunnel used to punish prisoners. Prisoner were tied up and rolled down in the tunnel to taste the horrific death. Death tunnel consists of sharp blades where prisoners were sent called Human Shredder. This tunnel is also called as ‘Death Cell’.

Local people living there believe that ghosts or jinns are also living there. It is also famous that a five-year-old child was brutally killed and dumped nearby into a well. They are truly passionate about the fact that a devilish ghost was responsible in order to disturb peace among the people.

They are firm in their belief that a malevolent Jinn once killed a Shabi [Prophet Mohammad S.A.W.’s companion] just to sow discord among the Muslims of the period. However, they truly have no idea about the name of that Companion.

Torkham has a hot, semi-arid climate that is influenced by the regional steppe climate. The annual precipitation average in Torkham is 407 millimeters, and the average temperature is 20.3 °C.