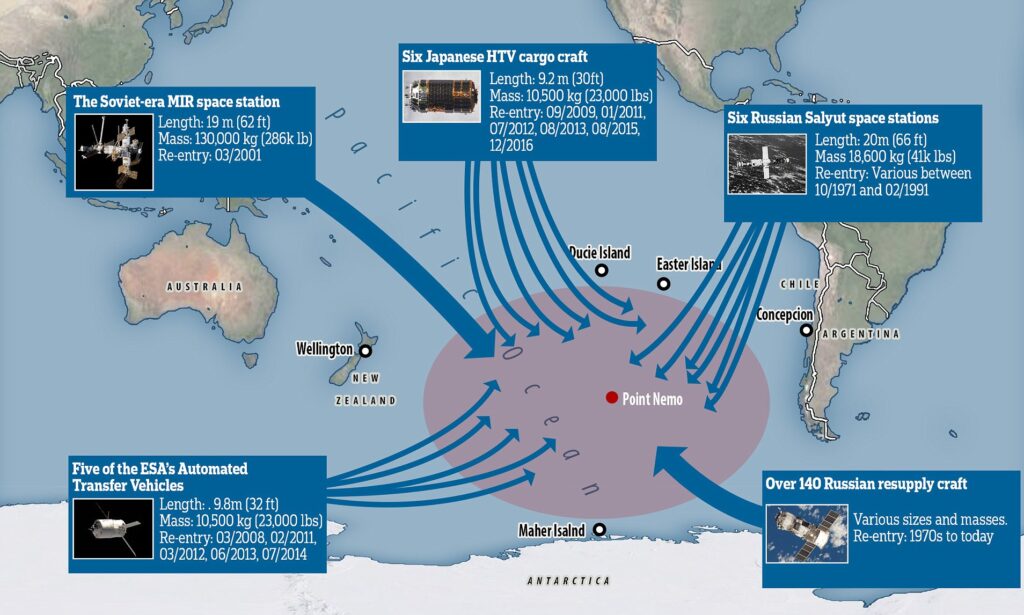 Point Nemo is a spot that is about 1,450 nautical miles from any spot of land. It is a perfect place to dump dead or dying spacecraft. This remote oceanic location is located at coordinates 48°52.6′S 123°23.6′W, about 2,688 kilometers from the nearest land—Ducie Island, part of the Pitcairn Islands, to the north; Motu Nui, one of the Easter Islands, to the northeast; and Maher Island, part of Antarctica, to the south.

This is why it’s home to what NASA calls its spacecraft cemetery. Smaller satellites end up at Point Nemo since the heat from the friction of the air burns up the satellite as it falls toward Earth at thousands of miles per hour. The problem is larger objects, like Tiangong-1. It is the first Chinese space station, which China launched in September 2011 and weighs about 8.5 tons.

According to an inner working source of the nonprofit Aerospace Corporation, there is some shocking information as well. The company doesn’t generate a forecast until five days before the space station is to break apart in Earth’s atmosphere. Since China doesn’t have control over Tiangong-1. China cannot assure that the space station will disintegrate over Point Nemo.

Buried under over two miles of water is the Soviet-era MIR space station. Moreover, the USA has buried numerous other space objects such as 140 Russian resupply vehicles at Point Nemo. Along with this, we can even find several of the European Space Agency‘s cargo ships (like the Jules Verne ATV) and a SpaceX rocket.

The internal source said a large object like Tiangong-1 can break apart into an oval-shaped footprint of debris. This debris extends 1,000 miles long and dozens of miles wide.

While not all spacecraft wind up in the cemetery, the chances are slim that anyone would get hit by debris. Regardless of where the spacecraft breaks up on Earth. Besides all those satellites, there are thousands of uncontrolled rocket bodies orbiting the earth. In addition to that, over 12,000 artificial objects larger than a fist are also orbiting the earth at the moment.

There are certain risks involved in crashing satellites. According to the European Space Agency, the worst kind of risk is when a piece of space junk hits another piece. Especially if the objects are large. Scientists have figured out that this debris can stay up in earth’s space for hundreds of years.