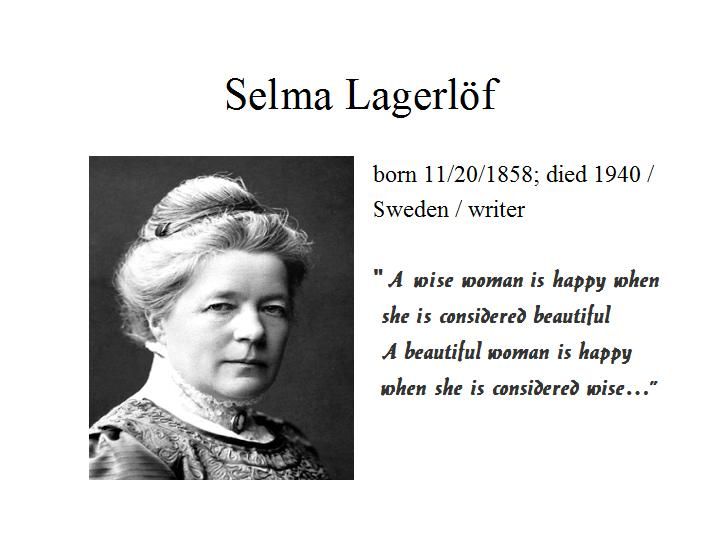 Swedens Selma Lagerlof has become the world’s first-ever woman to receive a Novel Prize in literature. Selma Lagerlof was born in 1858 in Sweden’s Stra Emterwik, Värmland region. She lived an extensive 82 years of her life during which she wrote several novels and books. Selma Lagerlof dieid in 1940. Her family raised her on the family estate, Mrbacka. She didn’t leave the estate until 1881. This is when she enrolled in a teachers’ college in Stockholm.

She started working as a teacher in Landskrona’s secondary school for girls in 1885. Selma had been writing poetry since she was a young child. However, she never published any of it until 1890. In 1890 a Swedish weekly awarded her first place in a literary competition. Moreover, the newspaper also went on to feature excerpts from the book that became her debut. People still consider Selma Lagerlof’s debut book as a crowning achievement.  Her first-ever book is one of the most well-known works she has ever done.

Selma wrote another book and decided to publish The Gösta Berlings Saga in 1891. However, people neglected the book until an agency translated the book into Danish. After this, the book received widespread praise. This helped the book achieve long-lasting success in Sweden and other countries.

She decided to leave teaching altogether in 1895, with the help of the royal family’s and the Swedish Academy’s financial support.

She visited Italy while writing the Sicilian-set novel Antikrists Mirakler (1897), which she also published. After publishing several short stories, she eventually wrote Jerusalem [The Holy City] (1901–1922). This was a novel about Swedish immigrants to the Holy Land whom she met while traveling there in 1900.

Her first outright achievement came with this work. Her later works were all inferior to the influence and popularity of Gösta Berling’s Saga. However, She did release the historical trilogy The Ring of the Löwenskölds, 3 vols., in the middle of the 1920s. Some of her other books such as Löwensköldska Ringen (1925), Charlotte Löwensköld (1927), and Anna Svärd (1928) are also quite famous. Additionally, between 1922 and 1933, she released several volumes of memoirs under the pen name Mrbacka.