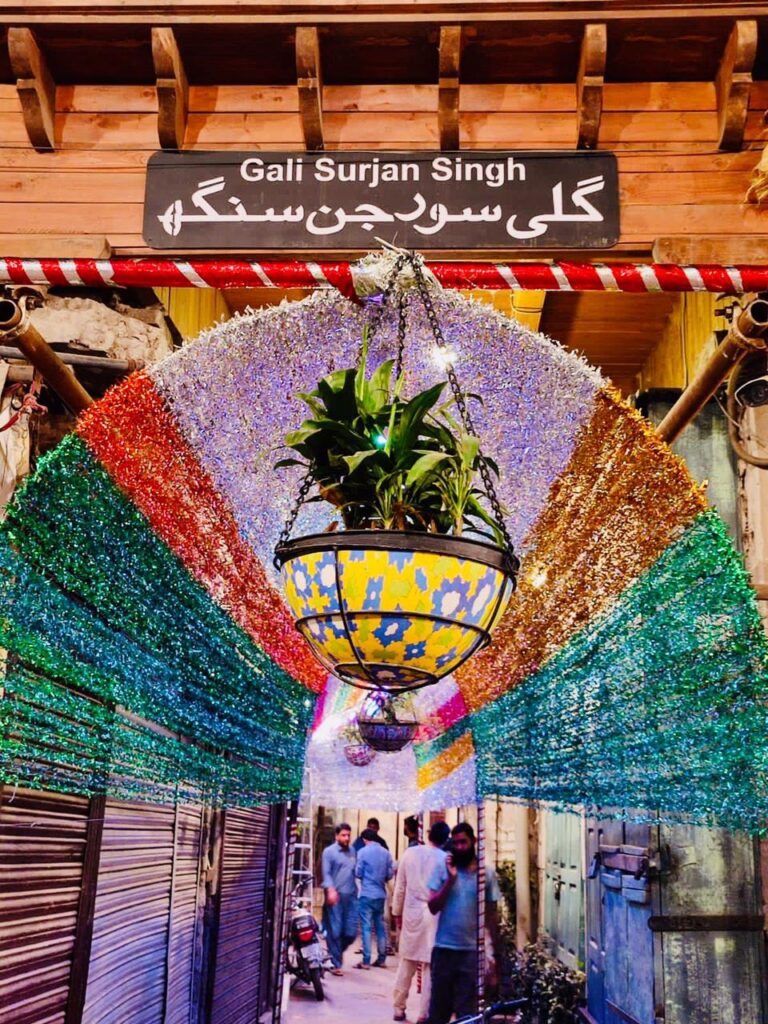 The most beautiful and colorful street on Androon Lahore is Gali Surjan Singh. The street was restored in 2011 by WLCA. Moreover, You can visit and endure yourself by the richness of the culture.

What comes to mind when someone says Lahore? Undoubtedly the rich culture and amazing food. The real Lahore, also known as Androon Lahore is full of mesmerizing buildings and secrets. One of them is Gali Surjan Singh. If you visit “Delhi Gate”, after a walk of 5 minutes there is a sign on the right side of the street. Whereas, entering there you can endure the cultural and historical thirst by all means.

The street was decorated with lights, lamps, and flower and plant pots that gave an extremely beautiful look to the Street. The designs on the pots are the same as the designs in Masjid Wazir Khan. Moreover, the water and gas pipes have been undergrounded and cleanliness and decoration have made this street beautiful.

This was the project of the Walled City of Lahore Authority (WCLA) to restore the Gali Surjan Singh. The project was completed in cooperation with the World Bank, Agha Khan Trust for Culture, the German Government, and Akhuwat.

This project was initiated in 2006 when they came into the walled city and saw this street. He then approached the authorities to start the restoration process. However, the street took a huge time to restoration just because of the concerns of the involved parties regarding the residents of Gali Surjan Singh. The complete restoration was done in 2011.

One of the most amazing things in this Gali is a “Matka performer”. Right after the Usman Baithak, you can see a house on the left side of the street. Here a small room is present to entertain tourists. Ghulam Sarwar is an eccentric 65 years old folk performer, who is a self-taught artist. His partner Muhammad Asif has a beautiful voice that dwells the sweetness in listener’s ears.

Moreover, Ghulam Sarwar is performing in Lahore for three years. Meanwhile, Asif has been with him for 6 months only. They call for the government and authorities to promote them on an international level.

There are almost 23 buildings here, 18 of which were constructed in the late 19th or early 20th century and catered to middle-income households with limited budgets. These buildings also represent the transformations in technology, architectural expression, and typology that were affecting Lahore during the colonial period. No doubt it is an interesting street to visit.