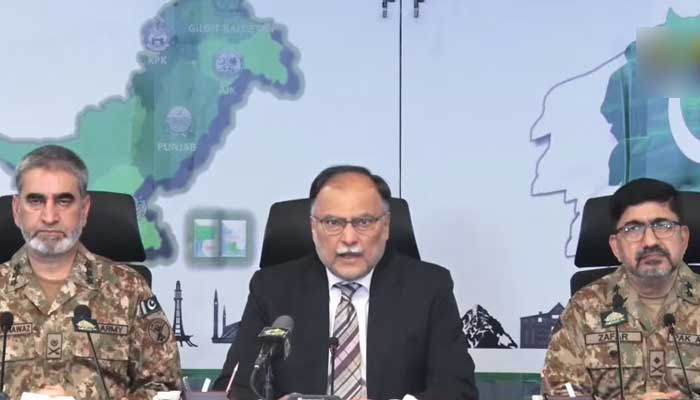 Minister of planning and Development Ahsan Iqbal has announced Adopt a District Program naming “District Adoption” in collaboration with the provincial government to help districts most affected by floods.

While briefing to the media representatives in Islamabad on Tuesday, he said that under this program, the administrative, human and health sector resources of major districts, especially Punjab, which have not been damaged by the flood, will be left for the disaster-affected people. Will be given. He said that it is time to show full sympathy and solidarity with the people of flood affected districts and it will be the great service for the country.

Ahsan Iqbal further said that 2 million mother and child nutrition packs will also be made with the support of university students.

He said that the vice-chancellor of each university will assign the task to each student individually or with community support to prepare these nutrition packs to help the women and children whose lives are at stake in the flood-affected areas.

He said the government is working to establish mobile clinics maternity hospital keeping in mind the health needs of women in affected areas.

In his remarks, National Disaster Management Authority Chairman Lieutenant General Akhtar Nawaz said that Pakistan receive one hundred and fourteen relief flights from 20 countries so far. He said that turkey is also sending relief trains to Pakistan. He said that the relief goods send by different countries include tents, tarpaulins, blankets, food packs, medicines and boats.

Chairman NDMA said that despite the fact that many items have been delivered to the flood affected people, there is still a severe shortage of tents in these areas. Mr Ahsan said that in view of the winter season, we are in dire need of warm clothes, blankets and quilts for those who sit in the open.

He said that Sindh is the most affected province, so 55% to 60% of relief goods have been sent to the province, followed by 15% to 20% to Baluchistan.

Further he said that relief materials have also been provided to Punjab, Khyber Pakhtunkhwa and Gilgit-Baltistan. He said that a complete record of aid supplies is being kept to ensure transparency.