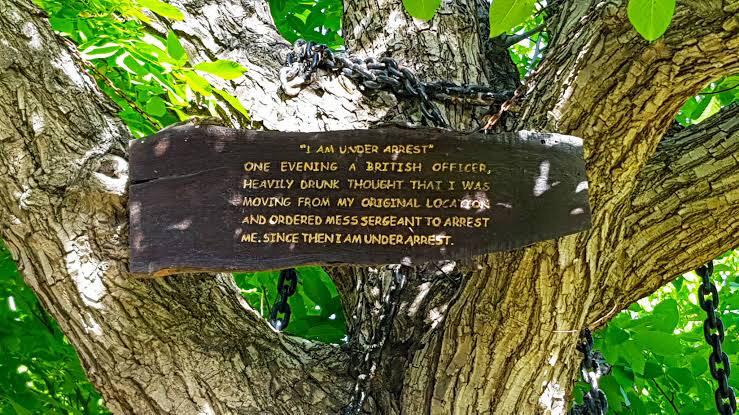 Under British rule, an innocent banyan tree gets chained for interesting allegations. James Squid ordered to arrest the tree as it was moving towards him. Tree left as it is after independence to show the oppression of British rulers.

History is full of interesting yet unbelievable incidents. Some remains might leave to remember our unique history of ours. If you visit the Pakistan Army cantonment in Landi Kotal, Peshawar, you might witness an interesting view there. You will discover a banyan tree that is shackled with chains and a board saying “I am under arrest”. However, the tree is as interesting as its story.

In 1898, the subcontinent was under British Rule. Army, establishment and other major departments works under British authorities. Poor Indians do not have any right to say or impose anything. They often get punished for silly and ridiculous reasons. But this time an innocent banyan tree came under radar.

An intoxicated British officer named James Squid ordered the mess sergeant to arrest the tree as he thought that it was moving towards him. Since then, the tree has remained in chains. He was very high and at that time he thought that tree as some attacker.

Despite the fact that Pakistan gained its independence from British colonial rule in 1947, a board on the tree still reads: ” I am under arrest. One evening a British officer heavily drunk thought that I was moving from my original location and ordered mess sergeant to arrest me since then I am under arrest.”

The tree, which is now on the grounds of Pakistan Army’s Landi Kotal cantonment, remains an attraction for tourists, foreigners and locals. The tree shows the oppression of British rule in the subcontinent and just imagine if a British officer could put a tree in chain then how were treating the locals of that era?

Even after 120 years tree is still under arrest. It is left to tell the new generation about the ruthlessness of British rulers. However, authorities ensured that the tree was maintained from time to time.