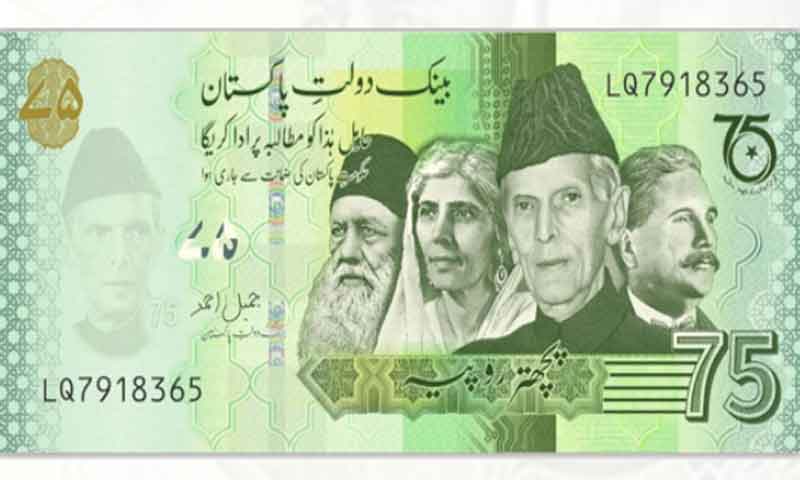 On the diamond jubilee of Pakistan, SBP issued a banknote of Rs75. This commemorative note is now available to the general public as well. This note is designs in a very unique and phenomenal style.

State Bank has released a commemorative banknote of Rs 75 on the 75th anniversary of the independence of Pakistan. This commemorative currency note will be available to the public from SBP offices and commercial bank branches from today. This commemorative note has the status of legal tender under Section 25 of the SBP Act, 1956. It can be used in business transactions across Pakistan.

It is pertinent to mention that the design of the said commemorative banknote was already unveiled on August 14, 2022. During a ceremony, here, at SBP headquarters, said a statement issued by SBP on Thursday

It is pertinent that it is the second commemorative banknote to be issued by the State Bank of Pakistan (SBP). After the issuance of the first commemorative note to mark fifty years of independence of the country in 1997. The themes and concepts for both the obverse and reverse sides of the banknote were developed by SBP and local artists.

Accordingly, the obverse of the banknote is graced with the portraits of Quaid-i-Azam Muhammad Ali Jinnah, Allama Sir Muhammad Iqbal, Mohtarma Fatima Jinnah, and Sir Syed Ahmed Khan. While the reverse of the banknote highlights our national commitment toward climate change and its repercussions for Pakistan. Which has gained added urgency in the light of unprecedented loss caused by the recent torrential rains and flooding. The images of the national animal Markhor and the national tree Deodar on the reverse also highlight the danger of extinction of such species and the need to preserve them.

The Rs75 commemorative note is equipped with security features as with the other currency notes. These include the Urdu numeral ’75’ which appears complete when the note is held in the light. Pure Image security thread with pulsing holographic rainbow effect and micro-lettering of ‘SBP’ and ’75’, among others.

Moreover, the portraits and numbers on the note have raised printing, allowing identification of the banknote by the visually impaired.

Also See: Banyan Tree in Pakistan is under arrest for 120 years