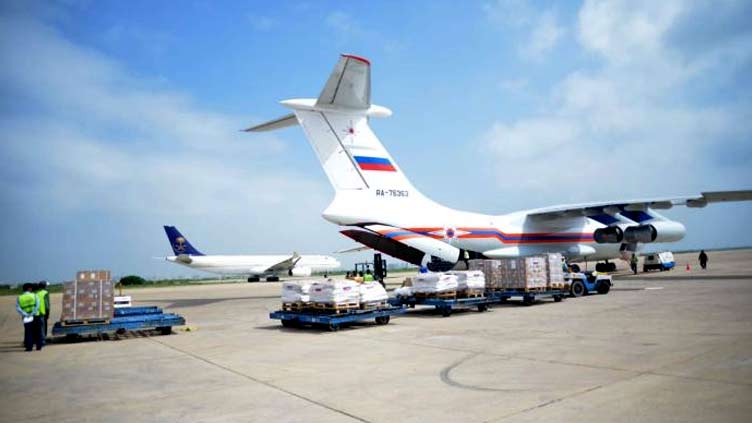 A Russian aid plane full of groceries and supplies landed at Karachi Airport a few days earlier. The plane was taking a lot of grocery items, including several daily uses and relief items to Pakistan. This is not the first time Pakistan has received international aid after the flood catastrophe has shaken the country. However, this was the first plane that came in from Russia. The goods were delivered as immediate aid for the flood victims.

Pakistan was hit with major flooding all across the country during the past month. This happened because of the unprecedented monsoon rains that fell above the average limit this year. Moreover, the climate change crisis caused by the whole world also lead to this major disaster. As the experts believe the ice in the mountains in the north of Pakistan melted more than average. Both these issues become the reason for massive flooding all across the country. Almost 60 to 70 percent of the country came under water in just a span of 7 to 15 days. Since then various international figures of visited Pakistan to assess the situation. Each one has called out to the international community for immediate Humanitarian aid for the flood victims.

Following the humanitarian visits of the country, international aid from all sides has come to Pakistan. Countries such as Bangladesh, Italy, France, Germany, the United States of America, and now Russia have sent aid to Pakistan. Russia is under heavy economic sanctions due to its invasion of Ukraine. Russian President Vladimir Putin recently met the Pakistani Prime Minister at a Summit in Samarkand. Many believe this relief package to be an outcome of that meeting. However, the common public of Pakistan is confident that this is the first step towards a good relationship between the 2 countries.

As much of more than 100 flights of international cargo aid have reached Pakistan since the disaster. However, the Russian aid plane is the most recent aid Pakistan has received. The relief goods had multiple items including food items, tents, and water cleaning devices. Russian Consular in Karachi Fedorov Andrey received the package. Representatives from the Government were also present.

Also See: New features you can enjoy on iOS 16 update