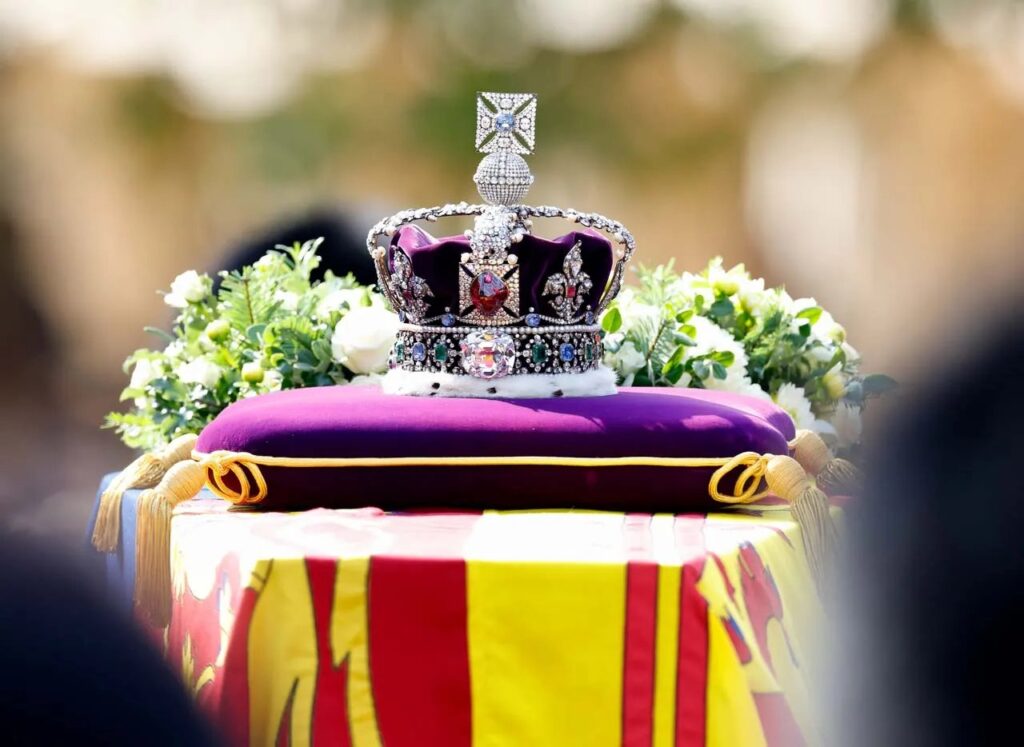 Imperial State Crown bears 2,868 diamonds, 269 pearls, 17 sapphires, and 11 emeralds. British monarchy kept the crown on the Queen’s casket. This crown has a vast history attached to it.

Britain’s Imperial State Crown, which rests atop Queen Elizabeth II’s coffin as her casket lies in state, is a powerful symbol of royal wealth, majesty and sovereignty. The crown, placed on a purple cushion, bears 2,868 diamonds, 269 pearls, 17 sapphires and 11 emeralds. Moreover, which sparkled as the coffin travelled from Buckingham Palace and lay in state in Westminster Hall.

After the death of the Queen’s grandfather, George V, for instance, the king’s coffin was being transported from London’s King’s Cross station with the crown on top. When the jolting of cobbled streets caused the diamond-encrusted globe on top. And the cross and sapphire it supports, to snap off and roll into a gutter.

Though it was hastily retrieved, the dead monarch lay in state under a mutilated crown. Which many in the crowd, including the new king, Edward VIII, took as a bad omen. However, Eleven months later, sure enough, he abdicated.

The crown was commissioned for king George VI’s coronation in 1937. Used for formal events such as the state opening of parliament, Queen Elizabeth II wore it following her coronation ceremony. The crown bears 2,868 diamonds, 269 pearls, 17 sapphires and 11 emeralds. It weighs 1,060 grams (2.3 pounds) and is 31.5 centimeters (12.4 inches) tall. The second-largest stone cut from the Cullinan Diamond-the largest diamond ever mined-adorns the front.

The queen once joked that even the Imperial State Crown was so heavy. That if she looked down while wearing it, “it would break your neck.”

The tradition of crowns representing royalty is “a time-honoured thing seen in cultures across the world and through deep time”. Says Anna Keay, a former curator at the Tower of London who has written the official guide to the crown jewels. “The business of wearing something on your head that speaks of your status as a special person – we see it through millennia.”