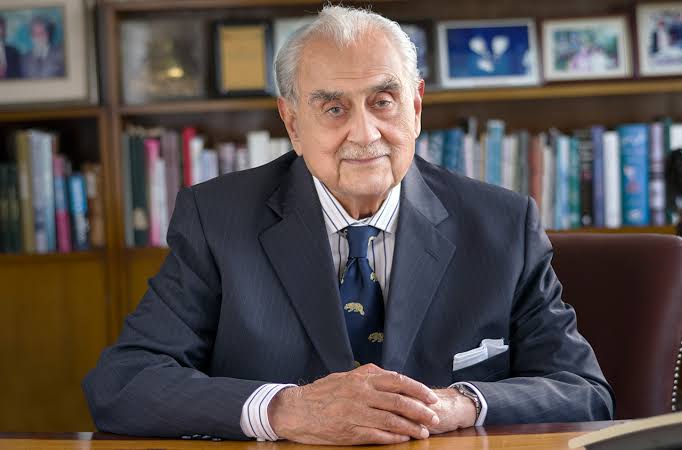 Another Pakistani made nation proud for his commendable services. The famous philanthropist Syed Babar Ali recently inducted into the American Academy of Arts and Sciences. Owner of Packages Ltd, Milkpack Ltd, IGI Group, and Tri-pack Films with a golden heart.

Syed Babar Ali and his extraordinary achievements as an entrepreneur, mentor, leader, and philanthropist have left a lasting footprint across Pakistan. He joins 250 Nobel and Pulitzer Prize winners, including Benjamin Franklin, Ralph Waldo Emerson, Albert Einstein, Martin Luther King Jr. However, and more recently, Nelson Mandela who have become part of the Academy’s 240-year history.

Syed Babar Ali, is among the 270 innovators and leaders from across sectors, disciplines, and geographies. Who were induct into 2020’s American Academy of Arts & Sciences cohort at a ceremony on September 9-10, 2022 in Cambridge, Massachusetts. He has been acknowledge in the category of ‘Business, Corporate, and Philanthropic Leadership’.

He also promoted the cause of the World Wildlife Fund (WWF) for Nature where he served in various positions, both in Pakistan and internationally, from 1972 to 1996. Moreover, Syed Babar Ali was the international president of WWF from 1996 to 1999, succeeding Prince Philip, Duke of Edinburgh.

Founded in 1780, the Academy is one of the world’s most respected honorary societies. Known for its exceptionally accomplished members and celebration of excellence. Moreover, The Academy has elected more than 13,500 members since its establishment.

“I am honoured to be inducted to the American Academy of Arts & Sciences. It was a proud moment for me as I represented Pakistan at the event along with some eminent individuals who were celebrated for strengthening their communities,”. Said Mr. Ali.