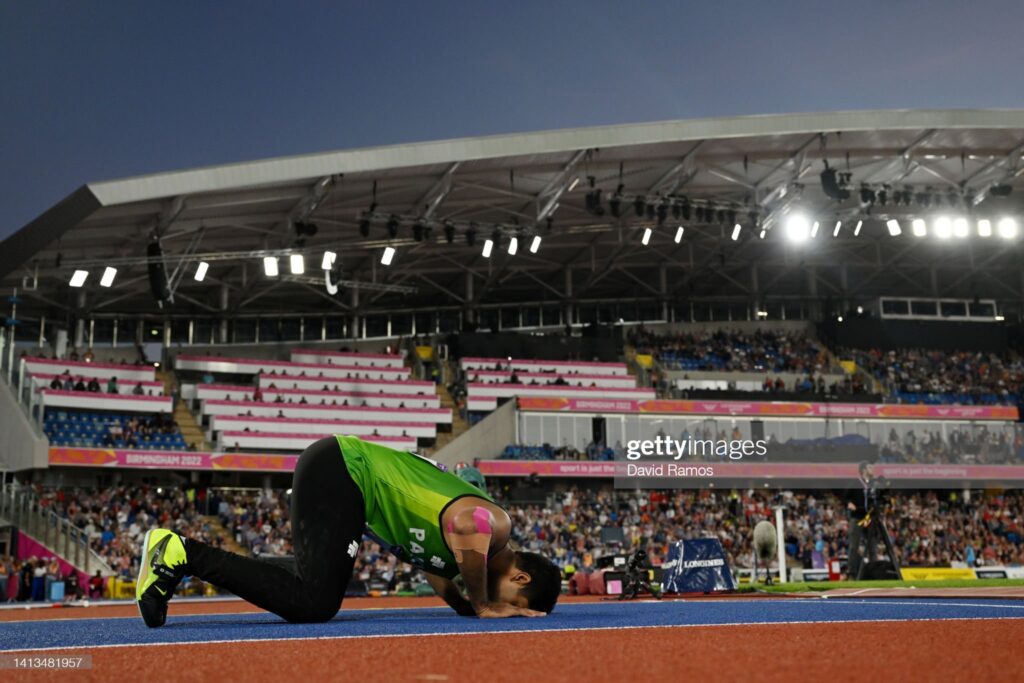 Arshad Nadeem bags a Gold in the Javelin finale last night. He broke his record by throwing the golden spear up to 90.18 meters. The whole nation is sending prayers and appreciation to the young athlete.

Last night was a historic moment for Pakistan. When Arshad Nadeem managed to win a Gold medal by smashing his record. Exactly a year ago the buffy man failed to get any medal for Pakistan in Tokyo Olympics 2021. On that event the fellow player from India Neeraj Chopra throws the highest Javelin and gets gold for his nation proudly. This year on Commonwealth games 2022, Our talented athlete sets the record of 88.00m in early throws to grasp the opportunity of getting gold.

He remained unbeaten until an athlete from Grenada throws the huge javelin up to 88.64 meters. Anderson Peters is a world champion and he was positive to get gold as well. But on the 5th throw, Arshad managed to throw the monstrous length of 90.18 meters and breaks his own personal best at the same time. After such an amazing throw it was evitable that gold belongs to Pakistan only. Players from Grenada and Kenya get silver and bronze medals respectively.

It is also noted that Nadeem was playing without any coach and facing a elbow and knee injury as well. He proves that dedication and hard work pays off in his own’s favor. “Due to prayers of nation, Allah (God) has rewarded me a gold medal. However, I thanked my physicians who had worked with me during my training.” Arshad Nadeem says.

After the announcement whole nations are swooning with joy and ecstasy. Appreciations and prayers are bombarded from all over the country over the young man. DG-ISPR and all major heads post their appreciating tweets. Arshad Nadeem’s fellow player and partner Talha Talib celebrated the victory in his own style.

His friend and arch rival Neeraj Chopra also appreciated Nadeem’s biggest achievement. This shows the real sportsmanship in the court.