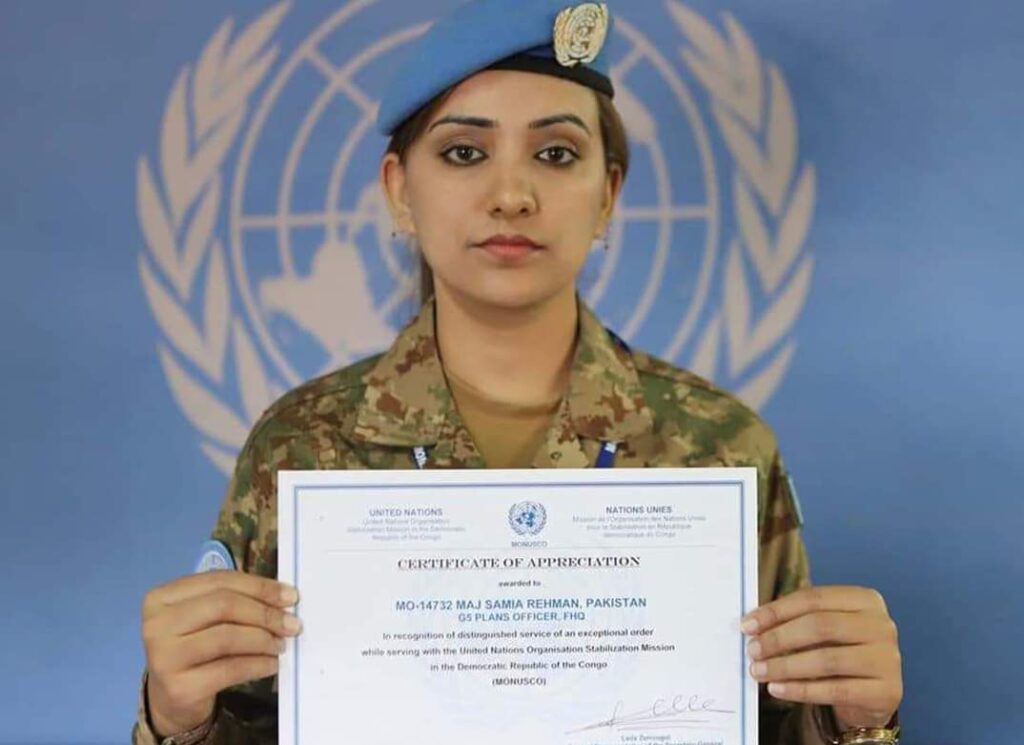 Major Samia has worn a Pakistani Flag in peacekeeping missions under the UN. Her achievements already made Pakistan a proud country. The reel star of Sinf-e-Aahan is the real iron lady of the Pakistan Army.

Major Samia Rehman is the real iron lady of the Pakistan Army. She is serving under the United Nation’s Blue helmet. Samia is working on peacekeeping projects around the globe under the UN. Moreover, She has already made the nation proud. She played a remarkable role in the drama Sinf-e-Aahan.

Many would have thought that in Sinf-e-Aahan, all of the actors are from Drama Industry. However, it is true to some extent but the anticipated drama by ARY Digital and ISPR production drama also includes a lot of Army personnel as well. However, The story of the drama was quite attractive for the girls who want to join the army. It shows what are the difficulties girls have to face in Army.

Major Samia Rehman has played a strict role in this drama. The female officer who tells rules to the girls and grills them to go by the book is Major Samia. The Drama has been a huge hit all over Pakistan. However, after that viewers asked about Samia’s appearance and came to know about the unknown facts about Major.

According to a female officer in the Pakistan Army, working under the United Nations flag and wearing the famed blue armbands for peace and stability is an honor for women peacekeepers. However, it saddened her how people in society underestimate the women of the society.

“Working under the United Nations flag and wearing a blue beret for peace and stability in the Democratic Republic of Congo is an honor for women peacekeepers,” said Major Samia Rehman.

Samia Rehman works with the United Nations Organization Stabilization Mission in the Democratic Republic of the Congo (MONUSCO). She conducts intelligence, surveillance, and reconnaissance missions for air operations.

However, currently, 78 Women in Pakistan Army are working under the UN umbrella. Whereas, they all are working in various roles across the world. So far, around 450 women peacekeepers from Pakistan have served in UN missions.

Pakistani women peacekeepers have received various honors. However it also includes Tributes at the UN, medals for outstanding achievements, and services performed.