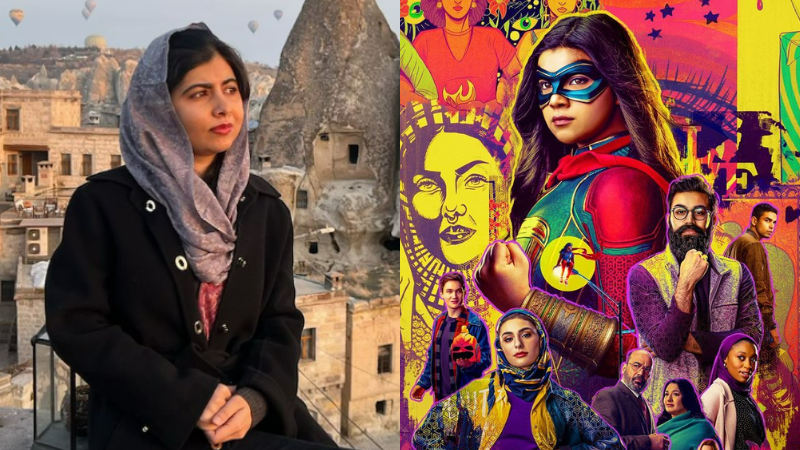 Malala Yousufzai the Nobel prize winner is all but praises Ms Marvel. She appreciated the production house showing real-life scenarios of Pakistani Muslim Immigrants. Fawad Khan is also in a star cast of mini-series.

The first episode of Ms. Marvel dropped this week. Fans are swooning with joy to see their favorite series finally. Malala Yousufzai, the new Nobel Prize holder praises the mini-series with a special handwritten note. She posted a picture on her Instagram handle in which she expressed her feelings about the series. The depiction of Muslim Immigrants touched her heart. Her note is even tweeted by the official Marvel account as well.

“It is not every day that I turn on the TV and find a character who eats the same food, listens to the same music or uses the same Urdu phases as me.” Malala wrote in her note, “What a joy to see Ms. Marvel reflect the lives of a Pakistani immigrant family and reveal a young superhero whose powers connect to her heritage. Thank you, Marvel and Disney+, and most importantly, Ms. Marvel,”

Little about the series

This mini-series is a multi-layers story about a Pakistani girl Kamala. Her parents Yusuf and Muneeba Khan ( played by Indian actors Mohan Kapur and Zenobia Shroff) are immigrants in the USA. They want their daughter to be free but at the same time obey their societal rules. However, Kamala feels a bit different in school, with friends, and even in her neighborhood. She lives in a house where Bollywood and Shah Rukh Khan rule. Moreover, a bit of partition is also discussed in the series which attracts fans of South Asia, especially India and Pakistan. It is a story of conflict between immigrant parents with their growing up daughter.