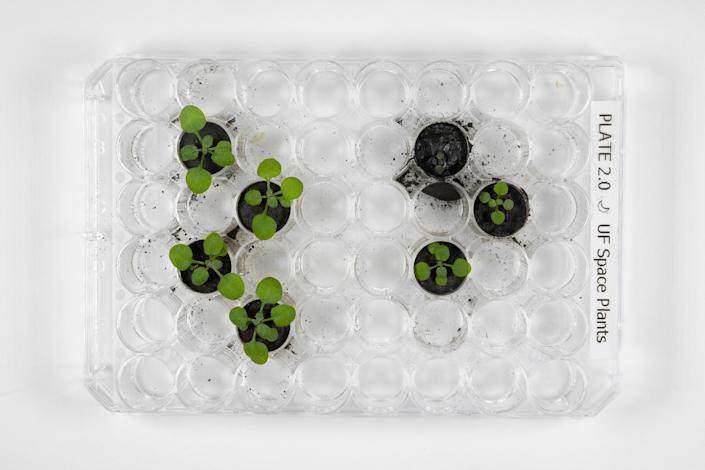 Scientists have been successful to grow the plants in lunar soil for the first time. The achievement marks a significant milestone in the exploration of the lunar surface.

Apparently, it is possible for plants to sprout and grow on the surface of the moon, as an article by University of Florida researchers reports. Developing plants on the Moon or during space missions can be the first step toward producing food and oxygen one day.

Their research was publish in the journal Communications Biology. Additionally, it analyzed how plants react biologically to lunar soil, which is very different from Earth’s soil. Lunar soil was collect during Apollo 11, 12, and 17 missions to the Moon. The soil weighed 12 grams or a few teaspoons.

”Developing food sources for deep-space astronauts will require the use of resources found on the Moon and Mars,” Nelson said.

Researchers in this study planted Arabidopsis Thaliana seeds in lunar soil. The soil came from Apollo 11 and Apollo 17 missions, which collected lunar soil samples. Arabidopsis is related to mustard greens and cauliflower, as well as other cruciferous vegetables.

The seeds were also plant in a lunar simulant which closely emulated lunar soil. Stephen Elardo from the University of Florida told a press conference Wednesday that lunar soils don’t have a lot of nutrients needed to support plant growth.

Elardo, Anna-Lisa Paul, and Robert Full are co-authors of a paper presenting this research in the journal Communications Biology, published on Thursday.

Even though the plants grew in a way that indicated stress. They still managed to adapt relatively quickly once they were provided with light, water, and nutrients.

Dr. Anna-Lisa Paul is a professor in the University of Florida’s horticultural sciences department who published the study’s first author. She described the moon samples as being “fine” and “powdery”. She added that the moon samples “stick to everything”.

Within days of planting, the seeds started sprouting. “It was amazing to see every group of seedlings grew after we planted them, walked away for a couple of days, and then went back to check,” Paul, who is also the director of the University of Florida’s Interdisciplinary Center for Biotechnology Research, told the media.