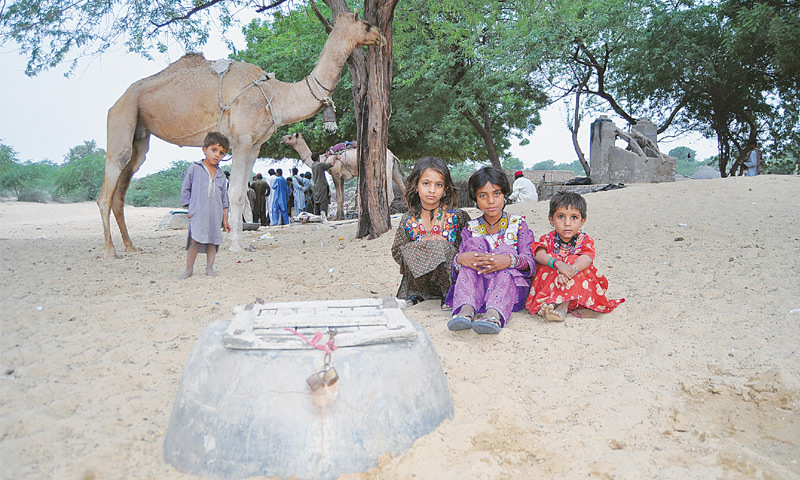 There is no way to know what shocking tragedy will be enough to shake the Sindh government and its machinery. Thar Desert in the province has been in the spotlight for a long now about the water crisis.

Thar has been ravaged by a variety of problems, from a severe lack of clean drinking water to a lack of medical facilities, to several children dying from malnutrition and disease. Drought and poverty have contributed greatly to the devastation.

We have reached the end of the death count. In Thar desert of Sindh, humanitarian assistance camps are rapidly disappearing as the television channels no longer broadcast live coverage of screaming, malnourished children and water crisis. However, thousands of men, women, children, and livestock are still struggling to survive, while others have fled to the barrage areas rather than let their children die.

There’s nothing to be surprise about here. The people of Thar experience it every year. However, this is the first time the media has revealed the terrible conditions they live in. And the tragedy is that this is not a natural famine, but rather a man-made tragedy caused by poor governance and criminal neglect.

Child deaths due to malnutrition

A malnourished child desperately waits for treatment, but it reaches him too late – he is dead. The death of 201 children this year has been attributed to food insecurity, diseases, and a lack of medical services in Tharparkar. Since December last year, the Provincial Disaster Management Authority (PDMA) reports that 259,947 families and 40% of livestock have been affected, with 167 lives lost, including 99 children.

Only 7pc Thar get water from RO plants

In 2008, a study conducted by Ali Akbar Rahimoon, head of an NGO in the region, AWARE revealed that fluoride was present in water to a varying degrees. According to the World Health Organization, the permissible limit is 1.5mg/liter. The results were high and low.

“In Thar, only 7% of the population has access to reverse osmosis plants. And only 17% of the land has water that meets WHO requirements,” he said.

Also See: Are you feeling GUILTY?

In addition to fluoride, arsenic content is also harmful to public health. Water with arsenic content can cause skin cancer, according to noted water technologist Dr. Ahsan Siddiqui from Hyderabad. Level of arsenic and fluoride found to be higher than standard within a radius of 10-15 kilometers of Mithi. Thar’s district headquarters, during a water sampling conducted in November 2013. The concentration of arsenic in the water was 20 mg/liter higher than its recommended value of 10 mg/liter, he explains. Additionally, fluoride levels ranged from 13mg/liter to 14mg/liter.

It is an entirely new phenomenon seenonly a decade ago in certain parts of the desert. Under given conditions and climatic changes, this technology best fits the area. The Sindh government is in the process of establishing 900 ROs by the end of May 2015.