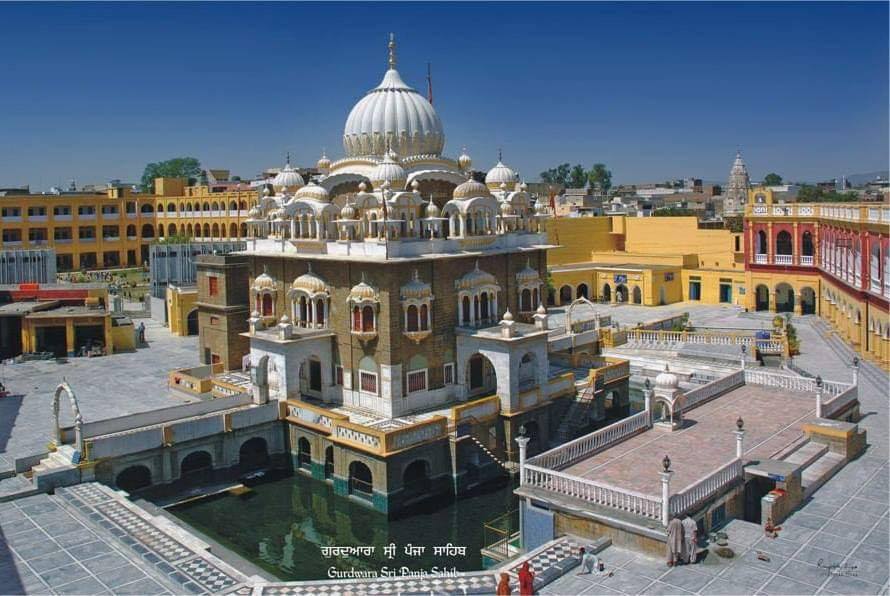 Another tale that tells the power of Khalsa is Panja Sahib Gurudwara. The eccentric building holds a special place in Sikhism. This story of love and belief is still fresh in these walls.

If you drive around 48 kilometers from Islamabad. You will reach a town name Hasan Abdal. An Alluring gurudwara is erected for hundreds of years in that beautiful town. That Gurudwara is Panja Sahib, Panja means Hand or in Sikhism, it also refers to the number 5. Whereas, Sahib means sacred in Panjabi culture like Shareef in Muslims, e.g Makkah Shareef, etc. Every year a lot of Sikhs gather here to pay their tribute to Guru Nanak Singh (founder of Sikhism). Gurudwara was built in the Mughal era between 1780 to 1839 by Raja Ranjeet Singh.

Guru visited the small town of Hamlet (now Hasan Abdal) for preaching In 1520. With his beautiful nature and appealing words, he attracted tons of devotees. He builds a small sanctuary and starts teaching his philosophy of love. On the hilltop, there was a shrine of the famous saint Shah Wali Qandhari. He gets a little intimated by the number of devotees of Guru. A small freshwater streamlet gushes from the top and fulfills the need of all the town. Moreover, it was controlled by Shah.

Also See: Baisakhi, The pure and colorful festival in Sikhism

Shah gets so jealous that he stopped the water for people down the hill. One day Guru and his devotees were reading their Kirtan under a tree. It was a hot day so one of the devotee went up to hill and asked for some water to quench their thirst. Wali refused him with great anger and pride. He came back and requested Guru for some help.

Guru smiled and said, “Repeat the Name of God, the Almighty; and drink the water to your heart’s content.“ He moved a stone a stream of fresh water start running at full speed. The stream was enough for all the town. After this Wali noticed that his freshwater spree is getting dry. He blamed Guru for this. In a moment of extreme anger and revenge, he pushed a big stone toward Guru from the top.

Everyone got paniced and devastated at that moment. But Guru was so calm and earthed. When the stone came near, it seems to crush Guru in a moment. He put his hand over the boulder, and it stopped. Stone became soft like a ball of wax or cotton. Impression of hand imprinted on the stone forever.

After that, water erupted from the stone, and to date crystal clear water is running at that point. Witnessing this Wali ask forgiveness from Guru and became his devotee as well. Gurdwara is thus also known as Panja Sahib. Hundreds of Sikhs and tourists came here to witness this miracle. Recently hundreds of Sikh gather here to offer their ritual of Baisakhi.