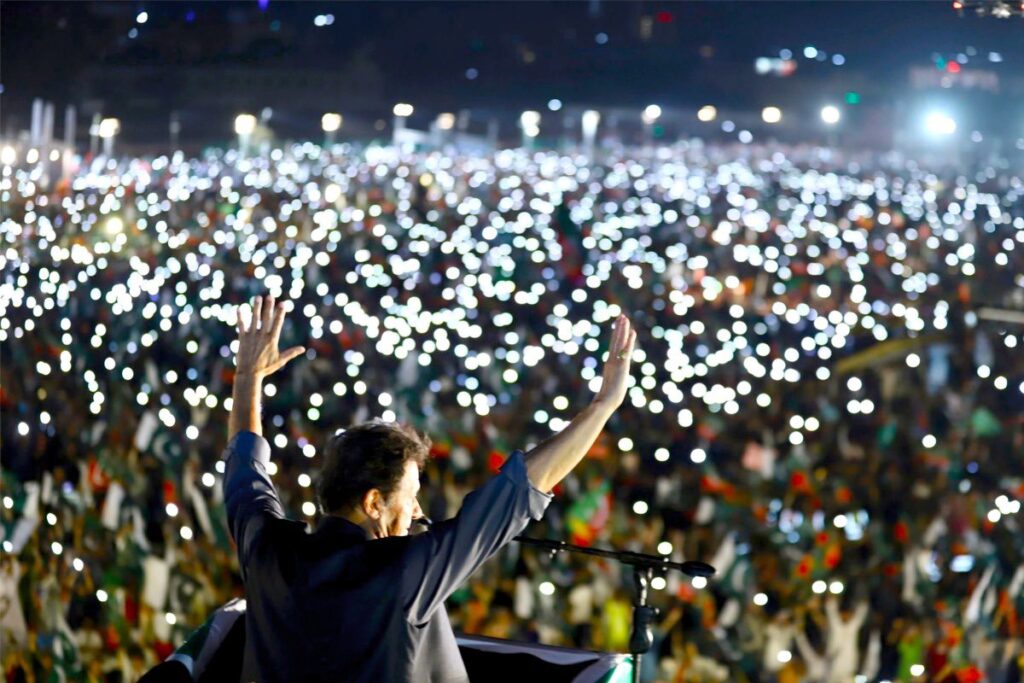 Former prime minister Imran Khan told his supporters and party workers to wait for his call for PTI power show at Minar-i-Pakistan in Lahore on Thursday.”

At the end of his speech, Khan said that if his rivals wonder what will happen after the Lahore rally, “I tell them that the real party has barely begun.”

“I won’t give a call just to PTI supporters but to the whole country. We all need to prepare in the streets, cities, and villages. You have to wait for my call when I call you all to Islamabad.” He made it clear that he didn’t want a confrontation.

“We do not intend to hurt our country, but the imported government will not be tolerated,” Khan added about his request for fresh elections “as soon as possible.”

‘A PML-N office-bearer should be a biased CEC.’

Sikander Sultan Raja, Chief Election Commissioner (CEC) for Punjab, was accused of being biased against the PTI. He is accused by saying his views were so evident that “the PML-N should appoint him as an office assistant.”

“I challenge you to listen to our cases collectively so that all nations will know who really collects money legitimately and who does it illegally.”

In his opening remarks, he addressed the crowd by saying, “Lahore … thank you! No matter how much I thank you, it will never be enough. I knew you wouldn’t disappoint me. I have never addressed such a crowd before.”

He said: “Now you understand what a selected government is. As a result of being selected internationally, it sits atop and afraid of elections. No matter the circumstances, I will not accept this government.”

Khan defended his actions in the Toshakhana scandal by saying that everything he bought back was documented. The money obtained from the sale of gifts he retained was used to fix the roads leading to his residence.

“In their time, people could return gifts by paying 15 percent. We increased the minimum price to 50 percent,” he said.

“I had to build a wall, and I did not take any government money. But these people are doing propaganda today. No prime minister has ever spent so little on themselves as I did.”

He claimed, not for the first time that he had lost power because he pursued policy of independence for Pakistan. According to him; “Mir Jaffar’s and Mir Sadiqs, among others,” conspired with global forces to bring down his government amid a time. “when the economy was booming, exports were at a record high, and the Coronavirus was wreaking havoc” he said.

He repeated his allegation that US Assistant Secretary of State for Central and South Asia Donald Lu threatened Pakistan’s ambassador to the US, threatening to remove him from his post if he wanted to get back into good terms with the US.

“What did we do to merit forgiveness? Did we go to Russia? Or did we refuse military bases? Remember Lahore, where these bad habits originated. Why does India not do the same?”

PTI chairman Khan said his government was under attack just as it was about to “break the shackles of the IMP.”

Khan encouraged his audience to never vote for this political rivals. He said “If you allow them to win a constituency, you will commit treason against this country.”

“I ask the courts, ‘Is it not your job to protect these officers?'” “These people – where they are sitting – tell me which federal officer will protect them from revenge when they know they will be subjected to it.

“During my 3.5 years of office, I tried to progress cases against them … but nothing happened. The NAB wasn’t under me; the courts were independent … what could we have done apart from their FIA cases? And those with power did not find corruption to be bad. It wasn’t a big deal for them.”

We will only accept one commission, which will be in the Supreme Court. Let’s have open hearings so everyone can understand what big conspiracy Pakistan underwent.”

Faisal Javed and Shireen Mazari claimed earlier that the government blocked the route leading to Minar-i-Pakistan to stop the rally from taking place.

Moreover, Mazari tweeted about PTI power show; “First they blocked all road access to Minar-i-Pakistan, now shutting down internet service.” They think they can stop the country from rising against this criminal mafia of a foreign government by shutting down the internet.”