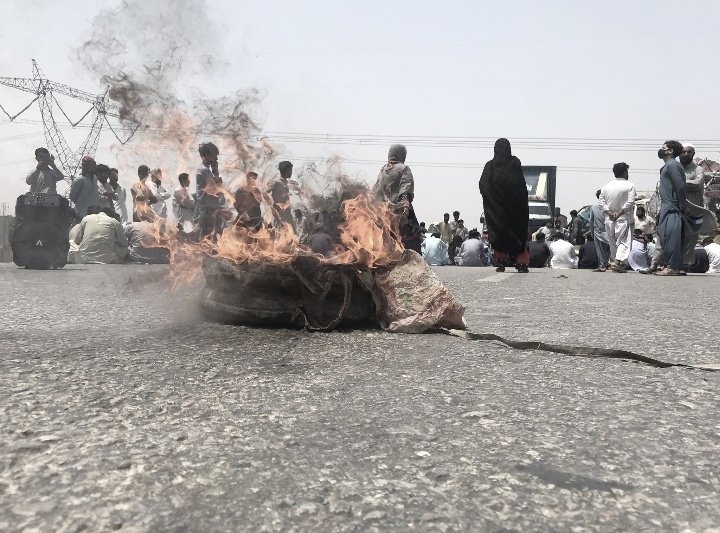 Chaghi: Protestors and Activists of Balochistan were shot injured after the brutal killing of the driver, Hameed Ullah. Who is the reason behind this killing and what will be its impact on the mindset of the people of Balochistan? Let’s see.

Reko Diq is one of the largest undeveloped copper and gold deposits in the world. This is Balochistan district, Chagai, which shares a border with both Afghanistan and Iran. Ba­­loch youths drive ‘Zambad’ pickup trucks. They use them to carry fer­rying oil, clothes, urea, and rice, among other things, too, and from Afghanistan and Iran.

These blue pickups are made by Zamyad Co. in Tehran. These are non-custom pickups which means these vehicles do not have any sort of records. There are roughly thousands of such vehicles in Balochistan. People of Balochistan use these vehicles for breadwinning through smuggling fuel from one place to another.

Security forces have warned Zambad not to come as there is tension between the forces and the Afghan Taliban. But an empty stomach compelled Hameedullah Baloch, 30, and other drivers to go to the border to transport urea during the month of Ramazan.

During an interview, everyone came to know that, the security faculty seized and destroyed the Zambad vehicles. But when Hameed Ullah tried to run away, security forces hit a bullet in his head. The brother of Hameed Ullah, explains with great sorrow that security forces can hit him in the leg to incapacitate him instead of killing him.

“He was the breadwinner of the family, he had three young children who were waiting for him to come back so he could buy them new clothes for Eid. All they got was a glimpse of his face in a coffin,” he says in his hoarse voice, which bears the scars of grief.

On the other hand, people are doing protests against this brutal killing. Forces have also attacked them even for peaceful protests. The people of Balochistan are facing serious consequences. However, they also feel more when they see, that no one is talking about their grief and sorrow.