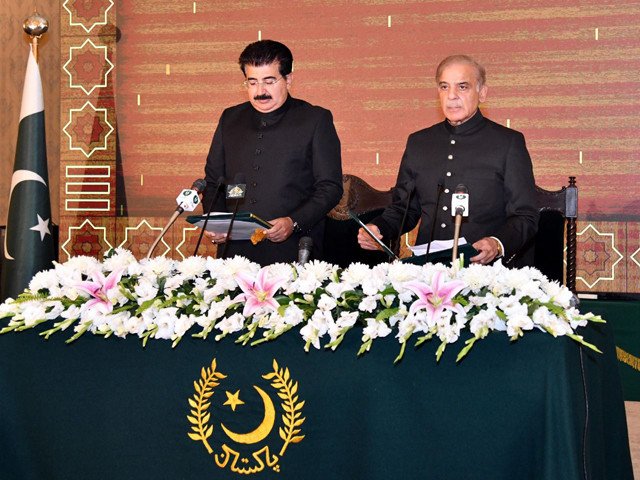 Shehbaz Sharif takes oath as the 23rd Prime Minister of Pakistan. He gets elected on this position on the date 11 April 2022 after the dismissal of the PTI Government.

Islamabad [Pakistan]: 11 April, 2022: Mian Muhammad Shehbaz Sharif takes oath as the 23rd Prime Minister of Pakistan. After he was elected by the national assembly of the country, he take over all the responsibilities of the country as a PM after Imran Khan. President Arif Alvi fell ill.  Senate Chairman Sadiq Sanjrani administrated the oath.

Mian Shehbaz Sharif, President of the political party, PMLN. He became President of PMLN when the Supreme Court of Pakistan removed his brother Mian Nawaz Sharif from the seat of Prime Minister. National Assembly has elected Shehbaz Sharif to hold this responsibility.

“Mian Mohammad Shehbaz Sharif has secured 174 votes,” announced PML-N leader Ayaz Sadiq. He was chairing the session after the resignation of Deputy Speaker Qasim Suri ahead of the vote. Whereas the other candidate failed to get even on vote.

However, Shehbaz Sharif is all set to grab the top position. When former Prime Minister Imran Khan-led Pakistan Tehreek-e-Insaf (PTI) government lost no-confidence votes in Assembly. No one has voted. PTI government walk over from the assembly by saying, They will never accept the thieves as their Government and all of this is a foreign conspiracy in the country.

Sharif’s candidature as the Opposition’s choice for the Prime Ministership. Pakistan Peoples Party (PPP) Chairman Bilawal Bhutto Zardari revealed this information during a joint press conference of the opposition parties on March 30. Pakistan’s Supreme Court in a historic judgment on Thursday. Supreme Court had called for the convening of the session of the National Assembly “not later than 10:30 AM on Saturday”. It happened after setting aside the April 3 ruling of the Deputy Speaker Qasim Khan Suri against the no-confidence motion on “Constitutional grounds”.

Court has reversed the ruling as well as the dissolution of the assembly. The Supreme court has ordered the national assembly to take a vote of No-Confidence on 10 April.

Pakistan Tehreek-e-Insaaf tried to pass the date of 10 April till the end. Supporters of Imran Khan and the following of PTI were waiting for the last card. In the mid of the night, Speaker Asad Qaiser left the assembly and went to Prime Minister’s House to meet Imran Khan and Cabinet. Even though, the gates of the Supreme Court opened.

The court also fixed the Saturday session with the conditions that the session cannot be prorogued unless the motion is voted upon, and in case Imran Khan loses the no-trust vote, the next PM had to be elected in the same session.

He was arrested by the NAB in the same case in September 2020 and incarcerated pending trial. In April 2021, the Lahore High Court released him on bail in the money laundering case.

On the other hand, the Turkish, American, and Chinese Governments also congratulated Prime Minister Shehbaz Sharif.