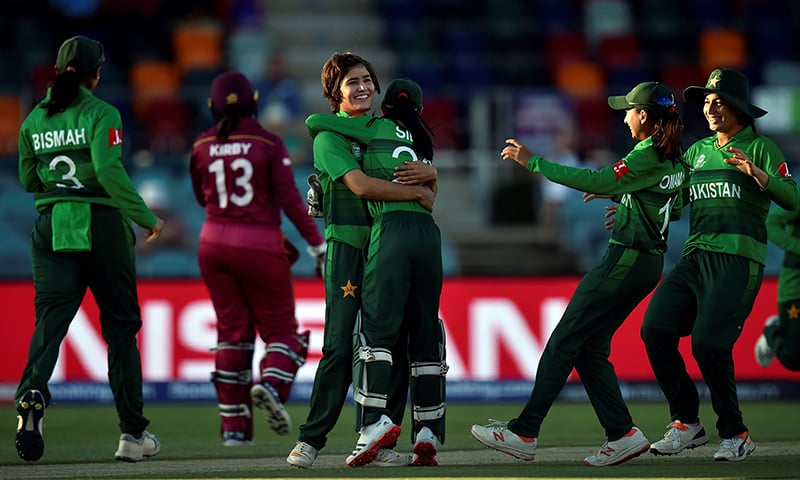 Women’s World Cup 2022: Pakistan ended their 18-match losing streak with an 8 wicket win over the West Indies on Monday. This victory may not last long but it boost morale of players for longer run.

Pakistan ended their 18-Match losing streak. Pakistan Women’s Cricket team won its last match in the Women’s World cup in 2013. Now, they break this losing stream and registered their first victory over West Indies on Monday. They have bowled out West Indies Women’s team on 89 and chased the target comprehensively.

Spinner Nida Dar played quite impressively. She has bowled out 4 Batters of the Top order just for 10 runs. Bowlers played an important role in this win. The damp outfield of the ground due to rain in Seddon Park also helped them. Besides Nida Dar,  Omaima Sohail (1/12), Fatima Sana (1/14), and Nashra Sandhu (1/24) picked up a wicket each as they produced an inspired bowling effort.

The highest score by the West Indies cricket team was made by the Opener Deandra Dottin (27) while Stafanie Taylor (18) and Afy Fletcher (12 not out) were the other two batters to have managed double-digit scores.

The Match was shortened due to the weather conditions at the stadium. Due to heavy rain, the match was shortened to 20 overs. For Pakistan, it was fortunate as they were bowling first and they took the benefit of this as well. They have restricted West Indies to 89 in 20 overs.

They got a target of 90 from one of the most competitive teams in the Women’s world cup 2022. However, it was an easy target but at the same time, a team like Pakistan could be confused as they have lost their last 18 matches. The team standing at the bottom of the Eight-Team standings. Pakistan’s score was 22 when they have lost their first opener, Sidra Ameen, at a score of 8.

Muneeba Ali has made 37 runs on 43 balls. Skipper Bismah Maroof came 1 down and made 35 runs for the 2nd wicket. Muneeba has hit 5 boundaries during her knock. However, still, they were needing 31 runs. Bismah Maroof and her partner Omaima Sohail made an exceptional partnership of 33 and won the match for Pakistan with 7 balls to spare.

Nida Dar has won the player of Match award for her exceptional 4 wickets in 4 overs with 10 runs. She has played the biggest role in this victory of Pakistan. The first of Nida’s wickets was a crucial one as she held a low return catch to dismiss Dottin for 27 off 35 balls. Then she got Shemaine Campbelle stumped.

Despite the loss, West Indies still occupy the third spot with six points from six games. Pakistan still is in the last spot.