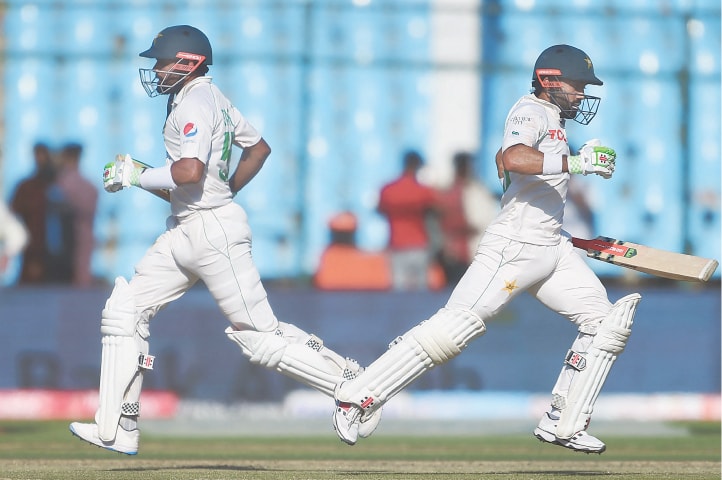 Pakistan, the second team to survive 1000 balls on the 4th and 5th day to save themselves from defeat in the home ground against the excellent bowling attack of the Aussies during the 2nd Test match of PAK vs AUS series. Immense fightback showed by the Pakistan cricket team was observed Pak vs Aus 2nd Test match.

Pakistan has batted almost 2 full days to save the test match in Karachi. The swinging pitch, hot weather, and even the best bowling attack couldn’t break them. Pakistan cricket team got out on 148 in the first innings. Their morale was down but skipper Babar Azam stood for his team and played a magnificent knock.

The hosts looked defeated at many points during the 2nd test match during PAK vs AUS Test series. Australians have made 556 runs in the first innings and declared. They have bowled out Pakistan on 148 in the first innings. Aussies have a chance to follow on but they decided to put a target on board.

Australia has batted again and declared on 97-2. The target they have given to Pakistan was 506. They have 85% winning chances. Even though, when Pakistan came to bat, batters struggled a lot. Imam Ul Haq got out, Pakistan was on 2 scores and 1 out. Azhar Ali was dismissed early as well. Pakistan was on 21 scores and 2 outs.

Babar Azam, the skipper of the Pakistan cricket team, came to bat at number 4 after Azhar Ali. The batters were struggling due to the new ball’s inswing and outswing deliveries from the Cummins and Starc. However, in the start, Babar and Abdullah struggled a lot. It was the 4th day of the match and the pitch seems to be turning now.

Abdullah Shafique has played quite defensively. He is a young talent but he didn’t play a shot that could not beneficial for the team. Babar Azam and his partner just go on rotational strikes. 5 sessions were left. Babar Azam played a magnificent knock and completed his century.

After the magnificent knock by the skipper, the team got stable. On day 4, the Pakistan cricket team didn’t lose any other wicket. However, the required run rate to win the match couldn’t match but draw is also becoming one of the possibilities. On day 5, unfortunately, Abdullah Shafique got out on 96.

Just when it seemed they would carry the team over the line, Nathan Lyon, bowling his 50th over with just under an hour left in the Test, got a ball to spin and bounce, finding Babar’s edge and Marnus Labuschagne’s hands at short leg.

Babar Azam played a captain’s knock and got praised by all over the world. He got out on 196 by the Australian spinner. But on the other hand, he has given the best stand to his team to at least draw the match if the winning is not possible. The Australian team also appreciated the knock of the skipper.

Josh Hazlewood, Viv Richards, Adam Gilchrist, Brett Lee, Ravi Chandran Ashwin, Ramiz Raja, and many names like this have praised his knock. Everyone appreciates the comeback of Babar Azam after the failure of his team in PSL 7.

The prime bowler of his time, Brett Lee express his gratitude on Twitter.

Lyon had Faheem Ashraf caught behind the next ball, and suddenly the Aussies were back on top. He also got a counter-attacking Sajid Khan for 9 to finish with 4-112, but Rizwan, with a perfect combination of aggression and grit, made his way to his second Test century and got his team over the line for a famous draw.