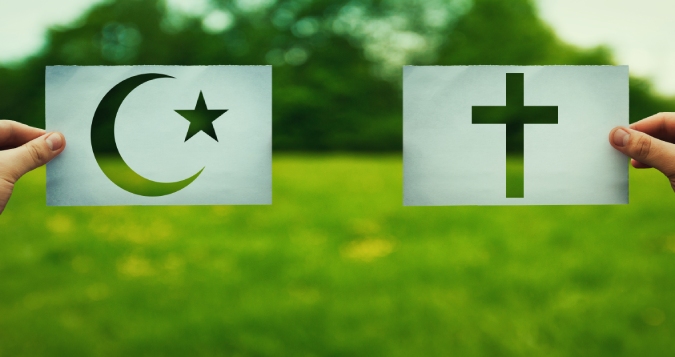 On September 4th, 2020, I adopted Islam as my way of life. Some people call me a convert because I was raised as a Christian and became Muslim after 43 years. Although I completed changed my life, in all honesty, naturally, my beliefs have always remained the same for as far as I can remember. I prefer the word revert because it means to “return to a former condition or belief. A revert is returning to that innate faith to which they were connected as young children, before being led away.” When I read that, I was able to completely relate to it. When I go back to my childhood I remember feeling at ease at with the concept of God.

As I grew older, I started attending church services. Of course, we all start learning from the story of Adam and Eve and how the serpent tempted Eve, then Eve convinced Adam to eat the apple from the forbidden tree, and from there sin began and God punished them. I was taught that we were all born in sin or sinful nature. From there I was told that Jesus was the son of God who paid the ultimate price and sacrificed his life to save ours. As a kid at that time, even though these things alone may have raised a lot of questions in my head, I was still fine and accepting of it. Then I was later told that Jesus was God Himself in the form of a man, but he was still God at the same time and also the holy spirit (the Trinity). That is when the confusion was born and my questions began.

I would drive my lovely mother crazy with question after question. My mother did her best to answer what she could, but it would usually get to a dead-end where she could not answer anymore and she would say “David, we just have to have faith.” I then started asking family members and others from Pentecostals, Jehovah’s Witnesses, Catholics about these things in general, but they could never really give me a logical explanation. Just like my mom, it would always end with “God works in mysterious ways, we cannot question these things, we just have to have faith, David.” It reached a point where doubting and asking anything made me feel guilty as if I was sinning, so I just left it alone for a while.

Years went by and conversations about religion would often come up here and there, but I never really got into it, until one day a coworker and I were talking and he said: “I’ve been saved… I’ve accepted Jesus as my Lord and savior.” He then told me that we have all been saved because Jesus was sacrificed and paid for our sins. That struck me as odd, for him to say that, so I asked him, “if that’s true, what you’re telling me is that anyone can just go all out sinning, committing murders and all kinds of things and would still go to heaven just by accepting that Jesus was sacrificed and already paid for our sins?” Oddly enough he answered “yes.” I could not believe it. To be fair though, not all Christians believe the same, but to me, that is one of the biggest problems in Christianity. You can ask 10 different Christians about what they believe, and you would probably get 10 different answers. Moving forward, years later, I joined the Army and was out in 2001 right before the World Trade Center attacks on 9/11, a tremendously tragic and heartbreaking event for all of us. Unfortunately, that also turned into media propaganda and an increase in Islamophobia around the globe. I would be lying if I said that the media did not affect my thinking at the time.

In 2005, I decided to join a contracting company supporting the military in both Afghanistan and Iraq. One way or another in my mind, I wanted to be a part of what I thought was the right thing to do as an American and a veteran of the US Army. At that time, I had never really been around Muslims in my life and had no idea what they believed in, but with all the negativity and propaganda in the media, of course, going into these countries, I believed all Muslims were evil. Soon my mentality would completely change. After a few months of working with the locals and being around them, I watched them make ablution, pray, and eat together. They all seemed like such humble and peaceful people, and they were the complete opposite of what we’ve all been told by the media. I got to build some friendships with these brothers. Unfortunately, we could not stay in touch. Not to say that these events were what brought me to Islam specifically, but they indeed did have a major impact and effect on my heart as I moved forward in my search for Allah.

Fast forward to 2020 during the pandemic, businesses and all places of worship were closed, and we were not able to attend Sunday services in the church, so we were quarantined at home. After a while of being locked up at home feeling so far away from God, I began watching YouTube videos and bumped into a video by a brother named Sabeel Ahmed. It was breaking down the basics of Islam, from the creation, the idea of an innocent child being born pure and sin-free until the age of puberty or until they become mature enough to understand right from wrong, the chain of prophets, the revelation in the Qur’an, and why it was revealed. All these things were so clear and easy to understand. I’ve always believed in this way but did not know there was a religion that matched my beliefs… Alhamdulillah!!! I found Allah. After a few more videos, and reading some books, I was convinced and reached out to the brother to set up a virtual meeting to take shahada. Immediately after declaring that “there is no god but Allah, and the prophet Muhammad is His messenger”, the weight I had been carrying for all these years was lifted off my shoulders. I finally found my way back home.