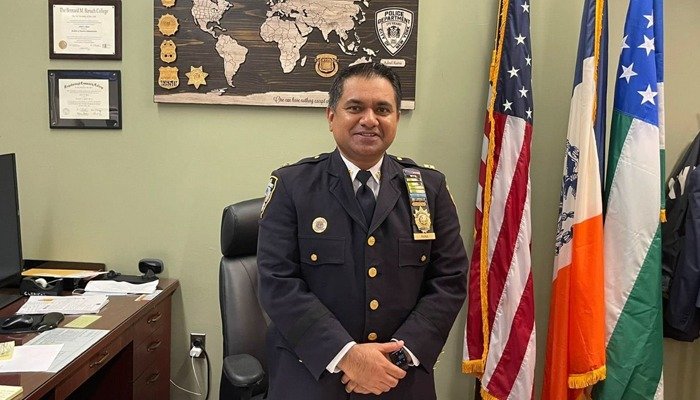 History made by Pakistani-American policeman Adeel Rana gets a promotion to the rank of Deputy Inspector in NYPD. 30 years old policeman is now handling 5000 policemen in his precinct.

The name of Pakistan is on the neon sign because a Pakistani-based policeman just get a promotion in the 81st precinct of NYPD. 30 Years old policeman Adeel Rana bags a deputy inspector position in NYPD (New York police department). He remains unnoticed until 2019 in the force. He was the first Pakistani appointed to the police department.

But this year he gets the honor to be promoted as deputy inspector, the first Pakistani American who gets this kind of deputy inspector position in NYPD in history. The New York police department is always been a bit racist towards blacks, gays, or third-world citizens. In such a case, it is really big news when a Pakistani-based citizen gets such a big position. He is now commanding 5000 officers under his position.

Also See: Is Pakistan going to allow US bases in the premises?

Pakistani embassy was really happy to hear this enormous news. They congratulate Adeel on this magnificent promotion. Last year Adeel bags the honor of first commanding officer in the force. This year he took it to next level and became a deputy in the police department. Moreover, his fellow officers are also gushing with joy. They praise the services and bravery of Adeel Rana and express their views via tweets and posts on social media.

The family of Adeel Rana is also very happy about his becoming the first Pakistani deputy in the history of the NYPD. Adeel is Gujranwala based Pakistani citizen who moved to the United States long ago. This is a piece of big news for his family resides in Pakistan as well. It is a sign of how Americans see Pakistanis as a peaceful message for the world.

Rana took to Twitter to share a video from the ceremony in which he promoted to the rank of deputy inspector. As his name called out, many of his colleagues in attendance could hear shouting in joy. However Captain Rana expressed his delight, saying he was honored to be able to lead the best men and women in the great department.

“We can make a difference if we work together.” He declared, “It is a historic moment and a glorious day for America!!!”

Councilman Deutsch of the 48th Council District, said: “Congratulations to Captain Adeel Rana on his new appointment as CO of @NYPD84Pct.” “Captain Rana is the first ever Muslim-American to head up an NYPD precinct. I know he will do our city proud!”