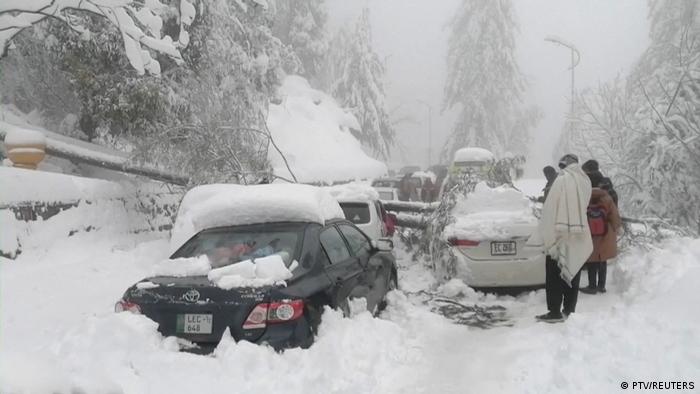 The tourist who came to enjoy a relaxing winter in the beautiful hills of Murree, got stuck in jams caused by the snowfall after the snow storm. Stuck in their cars most tourist died of cold or carbon mono-oxide built up in their vehicles

On January 7th, Friday a predicted snow storm started in Murree and snowfall continued the whole night. This heavy snowfall left places covered up to 6 feet in snow. A whole lot of tourist that came to enjoy Murree’s weather got stuck in the jam caused by piling up of snow. Around 22 people stuck in this disastrous jam died mainly due to cold and carbon mono-oxide poisoning.

The 22 people dead includes all men, women and even small children. Most of the dead were families and friend groups that were travelling to Murree via car. With snow piled up on the road, these people had no other option than to spend the night inside their cars.

Influx of more than 1,00,000 tourist vehicles in Murree

Since the start of winter season in Murree, the number of tourist coming in are record breaking. With Murree only having a capacity of limited vehicles, there has been constant road blocks since the start of winters. According to estimates around 155,000 vehicles entered into Murree which is much more than the town’s capacity of 4000 vehicles. This massive tourist influx caused traffic, parking problems and a rise in hotel fares.

With tourist coming in at such large numbers, the government departments were warned to regulate numbers. The departments however failed to do so causing massive jams in Murree and other nearby areas. This massive tourist influx and road jams are the main reason behind the deaths in Murree which is why an investigative committee is set up to further investigate the failure of authorities.