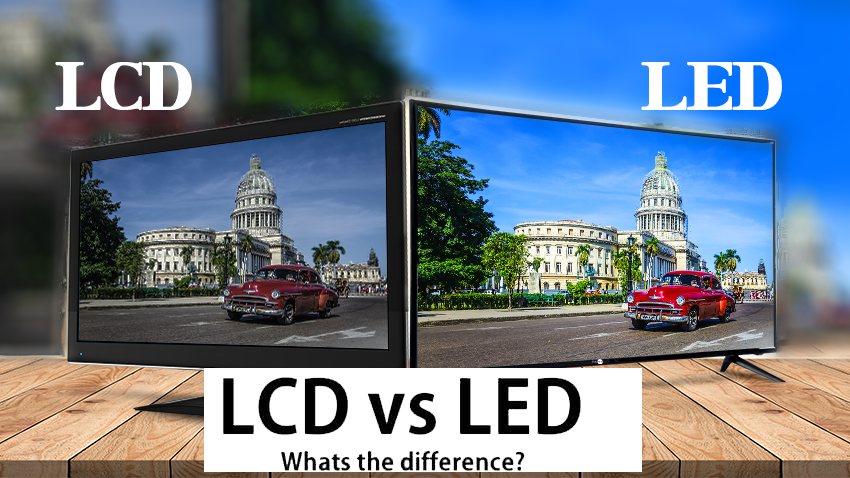 Today, in a world full of technical progression we cannot misunderstand the technological developments and innovations. In this era it is difficult for a normal man to differentiate technical terms such as; LED TV, LCD TV, QLED TV, UHD TV, OLED TV, and more. The confusion leads a person to decide whether to choose an LED TV or LCD TV screen. Or What is the difference between LCD and LED. However, both have their own characteristics and advantages. It is noteworthy that some features make LED more favorable than conventional LCD TV.

Dynamo LED offers both the qualities of LED and LCD TVs, and we appreciate the benefits of both them.

In this article, we are going to explain marked difference between them.

Display technology which is used to create the picture displayed marks the main difference between an LED and LCD monitor.

It is important to note that ‘all LED monitor is LCD in nature, but not all LCDs are LED monitors’ because LED (Light Emitting Diode) monitor is an improvised version of the LCD (Liquid Crystal display).

LED is a step further from old technology uses LED backlight technology instead of fluorescent lamp. And OLED (organic light-emitting diode) technology improves it even further by eliminating the need for backlighting.

Even LED has advanced from early to new monitors. Early monitors had LED lights placed on the edge of the monitor, but now LED monitors are direct-view LEDs. They are even more advanced and replace the entire screen with an array of LEDs.

This turns to a single monitor having countless light-emitting diodes. Additionally, this expands how big the monitor can be without blowing up the cost exponentially.

Pixel pictures measures the quality of direct-view LED screen. It is the distance between two adjacent diodes on the screen. Smaller pixel pitch makes better the quality of the image.

WHICH ONE IS BETTER?

To answer the question ‘which is better- LED or LCD TVs?’ Let us go through these factors one by one and understand which technology wins in each criterion:

LED TVs are more energy-efficient than LCDs since LEDs replace fluorescent bulbs with light-emitting diodes   A 32-inch LED TV screen consumes 10 watts less power than the same size LCD screen. The difference in power consumption increases as the size of the display increases.

Light-emitting diodes are smaller in size compared with fluorescent lamps used in LCD monitors. Thickness of diodes used in LEDs is next to none though countless diodes are assembled in the same plane but its thickness remains the same. On the other hand, fluorescent lamps have considerable thickness therefore, an LED panel is thinner than an LCD panel.

It is marked that an LED screen can be one-third the thickness of an LCD screen of the same size.

Positioning of the light source in Edge-lit LEDs has a slight drawback in viewing angle of LED TVs. However, direct-view LEDs offer a better angle for viewing than LCDs as the light source is evenly spread on the screen.

Response Time is the time a TV takes to shift from one color to another. It is generally measured in milliseconds (ms). The shorter the time to respond, the better the quality of the images produced.

Response Time is inversely proportional to the quality of the images produced on the screen.

LCD have only one backlighting technology that shows only black and white image but on the other hand, LED displays use full-array LED backlighting by emitting entire RGB spectrum providing a deeper RGB contrast.. So LED TVs offer significantly better contrast than LCDs.

WHICH ONE IS BETTER FOR THE EYES?

LEDs provide a comfort zone to eyes by providing option to dim the backlight and a wider viewing angle without harming image quality.

Hence, LED display is far better for your eyes than an LCD.

LCD TVs backlight is covered by liquid crystals but LED TVs contains lots of smaller diodes. If a diode is damaged, it can be replaced by another diode. In case of LCD, the entire bulb is replaced if any damage occurs to crystals.

Therefore, an LED display is easier and cheaper to maintain.

LEDs are advanced in almost every aspect and therefore, it’s much costly and expensive than LCDs. However, this is only when we are considering the purchase cost.

Since LED displays are considerably thinner thus weigh less. On average, an LED screen weighs about half of an LCD screen of the same size.

As you already have noticed that LED already won the battle. LED TVs fulfill the demand of newer and high profile technology, thus attractive too.

LED screens become the first choice across generations today. It is often regarded as third generation display and also meets the preferences of today’s generation very much. Its advanced features give cinematic experience thus making life more enjoyable and better.