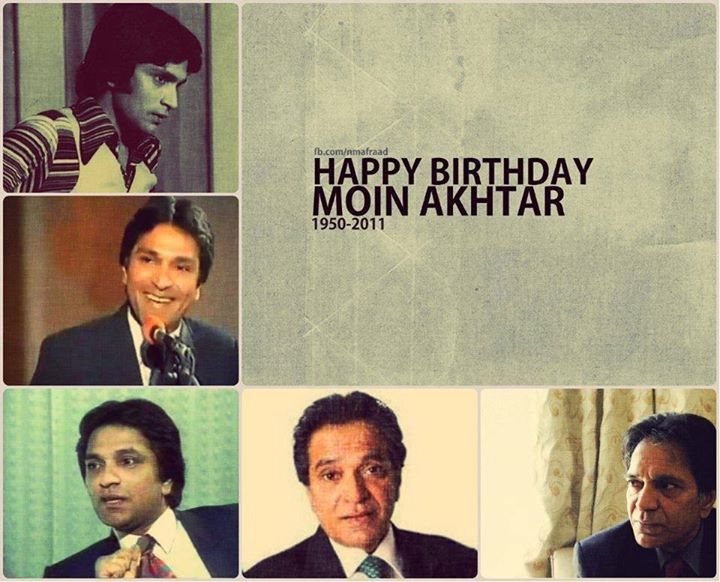 Charismatic, extravagant, exuberant, humble and larger than life — the legendary Moin Akhtar. An artist of Pakistani television, film and stage, remembered with love on his 71st birth anniversary today.

There are few personalities in the world who left their mark for eternity. One of them definitely was The Living Legend Moin Akhtar. Just like his name, the star shines all his life and gave a new perspective to Pakistan’s entertainment industry. His comic timings, dialogue delivery and perfect grip on language is what makes him eccentric in this generation. A lot of new actors tries to copy him but they only reaches to gist. On his 71st birthday we pay homage to the gem we lost 10 years ago. He is dead but very much alive in the hearts of his fans.

Moin Akhtar born on 24th December 1950 in Karachi, Pakistan. His family came from Uttar Pradesh during partition. His father Muhammad Ibrahim Mehboob was a man of contention. He worked really hard and established his own printing press and garment business in the city. Initially he disapproved the idea of Moin becoming an actor. He beats him with belt but with consistency and dedication, he molded his father to his side.

He started his career at the age of 13. He acted in the drama of Shakespeare name The Merchant of Venice in theater. Later his took this side seriously and played a drama on defense day telecasted on PTV. He largely acknowledged by the female character he played in Rosy. Rosy was the adaptation of Hollywood show tootsie. Just like the Hollywood version, Rosy get the same fame, moreover it gave Moin the new horizons of fame and name.

He played numerous plays, dramas, skits, satires etc in the career of 45 years. He was fluent in 8 languages. Urdu, English, Bengali, Punjabi, Pashto, Gujrati, Sindhi and Memoni were on his finger tips. This fluency helped him in adapting characters accurately. He even changes the body language according to language and situation. This talent of his admired by his colleagues as well as Hollywood and Bollywood as well.

Moin had performed with many Indian artists such as Lata Mangeshkar, Madhuri Dixit, Dilip Kumar and others. He also hosted the show Kya Aap Banaingay Crorepati?, the Pakistani version of game show Who wants to be a Millionaire? He was also a singer, an album came in which he sung 7 songs. He has a melodious voice.

In 1995 the famous talk show “loose talk” started on national tv. Along with his best friend and cohost Anwar Maqsood, they started a political satirical show. Anwar was the writer of the show as well. In this show they mentions the problems prevailing in society in comic way. Moin Akhtar played 400 different characters in 400 episodes of the show. Perfect grip over language and keen observation made each character almost flawless.

This show embarks the versatility and talent internationally. Friends of Moin was trying to register him for Guinness world record to do such characters. Anwar Maqsood and Bushra Ansari helped him a lot in his career. Their trio was famous for quality content and devotion. Moin was not in the favor of ill comedy. He always avoid abusive comic lines and absurdity. This makes his content family and full of amazing lines.

In more than 45 years he gets numerous awards, shields, recognitions etc. Some of the main and famous listed below.

Death of a hero

He was a hearth patient for a very long time. Moreover various bypass operations helps him to live much longer than anticipated. But the last stroke was unlucky for him and he died on 22nd April 2011. Various actors sends his condolences and declares this the loss of the industry. Even today many fans and artists wishes him birthday on twitter and other social media platforms. He left a grieving wife and 2 sons and 3 daughters behind him.

His namaz e janaza prayed by the famous singer turned scholar Junaid Jamshed. Whole industry was in shock and grief at that time. Many English and Indian actors call this a major loss of humanity. Nana Patekar is a prominent name in this regard.

Today on his 71st birthday everyone is paying tribute and sending love towards him. Even google does not forget about it. Pakistan-based guest artist Hazem Asif made an exclusive doodle for his birthday. It displayed on google homepage for Pakistan. Here’s to the many faces of Moin Akhtar and the smiles they brought to fans around the world.